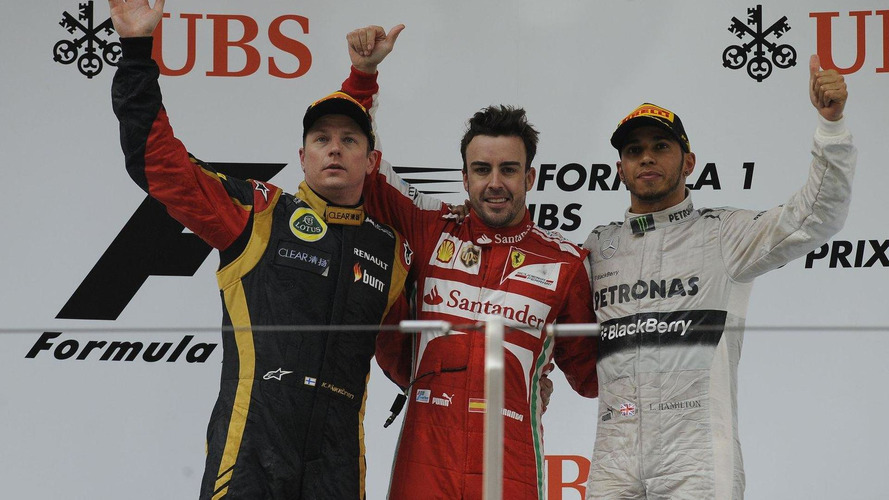 Ferrari's Spaniard Alonso won a tyre and strategy-dominated Shanghai race, having retired from the Malaysian grand prix three weeks ago.

He is now just 9 points behind title leader Sebastian Vettel, while Kimi Raikkonen and Lewis Hamilton are also within a 12-point cluster separating the drivers' standings' top four.

"At moment I think Ferrari, Red Bull, Lotus and Mercedes are similar," said Alonso on Sunday. "It's very close to call and a very open championship."

In total contrast, and with the 'Multi-21' misery still in memory, Mark Webber's woes deepened in China.

After running out of fuel and being disqualified on Saturday, the Australian crashed into Red Bull stablemate Jean-Eric Vergne during the race, earning him a three-place grid penalty for Bahrain in a week.

His race ended when his wheel fell off.

"This is one of the worst weekends he's ever had," pundit Eddie Jordan told British television BBC.

More generally, while this year's races are undoubtedly action packed, outspoken purist Jacques Villeneuve admitted on Sunday "I don't like modern formula one".

"There was no action," said the 1997 world champion, joining the chorus of criticism of the heavily-degrading tyre-induced strategic racing.

"Lot of overtaking but no action," Villeneuve explained. "Lot of drivers minding their own pace."

F1's fast-paced calendar moves on to Bahrain next week.

"The celebrations tonight will be nothing special as I have an early flight for Bahrain," Alonso said on Sunday.

"I'll have some dinner and the guys will probably party more than me."