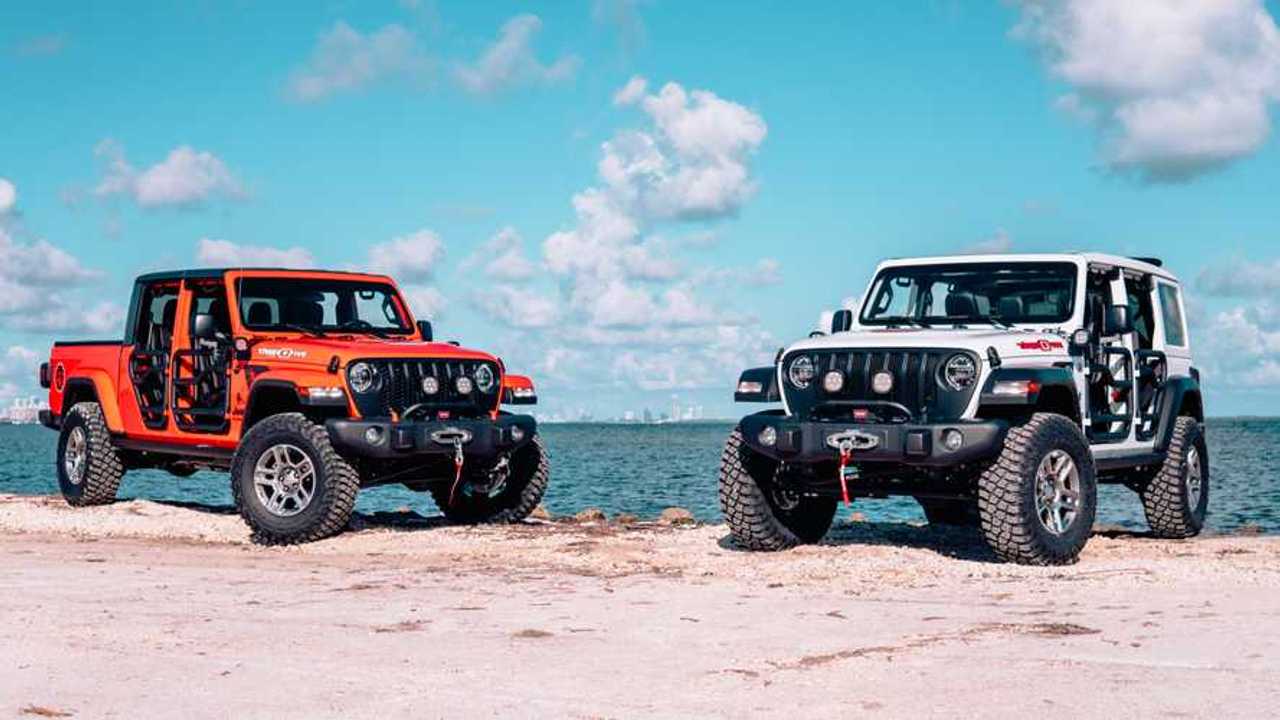 The duo looks ready to hit the dunes of Ocean Drive.

Jeep pays homage to South Florida with the reveal of two new special editions of the Gladiator and Wrangler at the 2019 Miami Auto Show. Named ‘Three O Five’ – after Miami’s infamous ‘305’ area code – the two special edition models are based on the Sport S trim level and are available with a generous endowment of optional Jeep Performance Parts by Mopar.

On the outside, Jeep equipped both the Wrangler and the Gladiator Three O Five with kit such as a winch and BF Goodrich off-road tires. Arguably, the most impressive piece of equipment are the two Jeeps’ unusual doors.

The Three O Five editions are equipped with metal tube frame doors painted black to match the interior of the vehicles. Like any other Wrangler and Gladiator, the doors Three O Fives’ doors are removable – complementing Miami’s laid-back, beach vibes. Given the doors lack any real protection from the elements, it’s hard to see how the climate control system will not be on at capacity most of the time, but, then again, as any South Floridian can attest, driving around with your A/C blasting is as much a part of living in the area as catching sun at the beach.

Inside, both vehicles include quilted leather seats decorated with various, model-specific small details, such as a Willys Jeep grille embroidered on the backrests. Meanwhile, audiophiles will find a 7.0-inch touchscreen infotainment system with Apple CarPlay and Android compatibility.

The fun details continue on the outside, too. The hood on both vehicles is decorated with a sticker that shows a very stylized depiction of the evolution of Jeep’s seven-slot grille – from CJ  to Wrangler. These small details look great and add a lot of visual flair to the Jeeps’ familiar shapes.

All Wrangler Three O Fives will be equipped with the Sky One Touch roof; the first time this feature will be available in the Sport S trim. The Gladiator Three O Five, however, features the removable roof of the standard model. LED headlights and a Miami-themed graphics package are included with both models.

Production is limited to 255 Wranglers and 50 Gladiators, which makes for a total of, you guessed it, 305 units. The only two color options available are Punk’n Orange and Bright White with contrasting colored stickers.