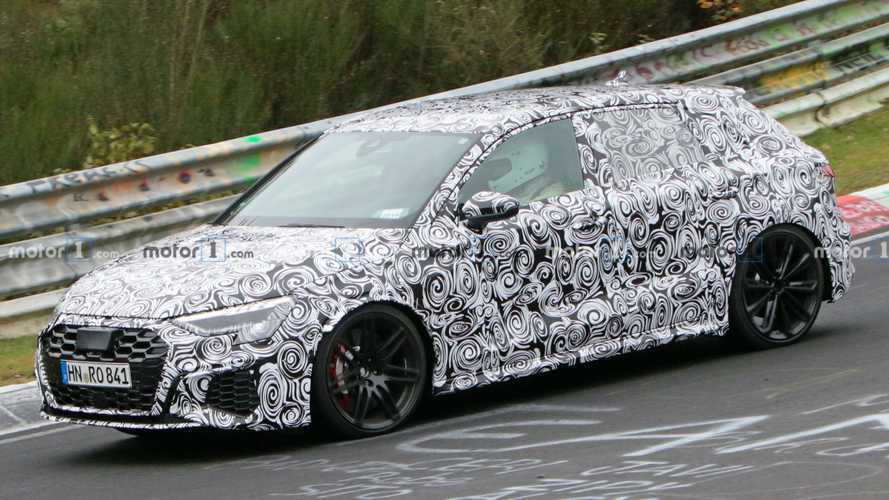 We won’t see a debut for a while.

In May, our eagled-eye spy photographers caught an Audi RS3 tackling the Nurburgring. While it wore the current RS3’s body, the wider wheel arches told the truth – it was the next-gen RS3. Now, we have more spy photos of the properly camouflaged RS3 test mule.

Camouflaged covers the entirety of the hatchback; however, there are several things the camo can’t hide. This appears to be a design evolution of the current car, featuring a similarly well-defined shoulder and the styled scallop down the side. Like most design evolutions, though, there are plenty of new bits, too.

The fenders are wider, hinting that the new model is wider than the outgoing one. The front fascia appears to be all-new with redesigned headlights, an aggressive and large grille, and redesigned air intakes on at corners of the lower fascia. The rear is the same with a new taillight design, redesigned rear bumper fascia, and a unique spoiler.

Inside, the RS3 should look a lot like the A3 that’s debuting in March. That means it should feature the company’s latest MMI. It also appears the tablet-style display will now be integrated into the dashboard. It’s unclear if the HVAC controls will keep their traditional knobs and dials or if Audi will replace them with a secondary screen.

The next-generation Audi RS3 should receive an updated version of the turbocharged 2.5-liter five-cylinder powering the current car. It develops 394 horsepower (293 kilowatts); however, the new model should receive a small power increase.

It could be a while before the next-generation Audi RS3 debuts. First, the German automaker will reveal the A3 in March – likely at the Geneva Motor Show. Then, the sportier S3 version will debut before the top-tier RS3 arrives near the end of next year.