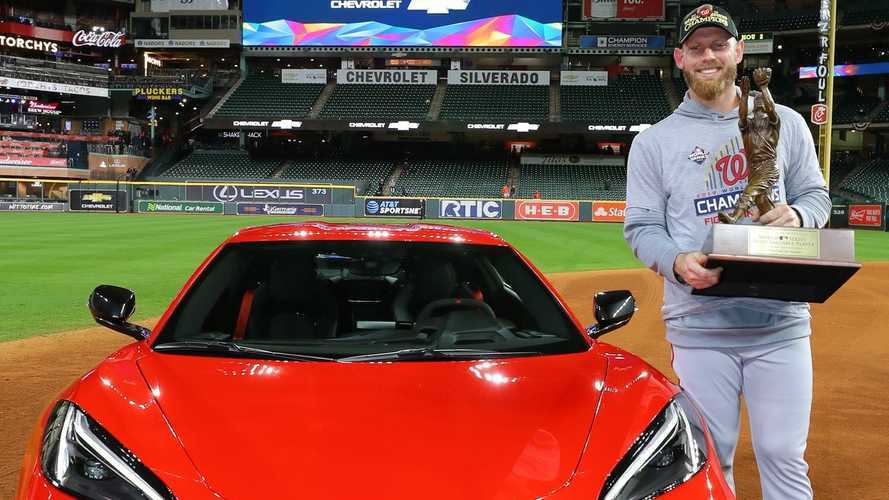 He doesn't actually get the car until Chevrolet starts building them.

Washington Nationals baseball team pitcher Stephen Strasburg is the World Series MVP, and his amazing performance at hurling the ball earns him a 2020 Corvette Stingray. It's the first World Series victory for the team, and the first Major League Baseball championship for Washington, D.C. since 1924 – when the city's squad was the Senators.

Strasburg doesn't get to drive the C8 Corvette home. Instead, the red car is just for this presentation, and the pitcher gets his new 'Vette when production actually begins, according to Car and Driver.

Strasburg should be patient about getting his C8 because the recent United Automobile Workers strike against General Motors might cause a delay in starting production. Assembly should still begin before the end of the year, but the vehicles might arrive in showrooms later than originally expected.

Prices for the C8 starting at $59,995 after the $1,095 destination fee. The figure can rise as high as $103,615 for the top 3LT trim level with all of the available options. The cost for the new Corvette convertible isn't yet available, but rumors put the figure at around $67,500, suggesting a slight premium over the coupe.

Even without the MVP honor, Strasburg would have an easy time of parking a C8 Corvette in his garage. In 2016, the pitcher signed a seven-year, $175 million contract extension with the Nationals. He also has an option to opt-out of the deal, become a free agent, and potentially even negotiate an even bigger contract, MLB.com reports.

It's worth noting that many athletes decide to donate these vehicles to charity when they win an MVP or similar award. As of this writing, it's not clear what Strasburg intends to do with his car.