Expect the company to squeeze out even more power from the high-horsepower Mustang model.

Just when we thought the 2020 Ford Mustang Shelby GT500 couldn’t get any hotter, we receive word that Shelby American plans to put its own unique spin on Ford’s most powerful Mustang model. First reported by CarBuzz, Shelby American’s upcoming GT500-derived Mustang model is sure to take the performance of the 760-horsepower super coupe and turn it up to 11. 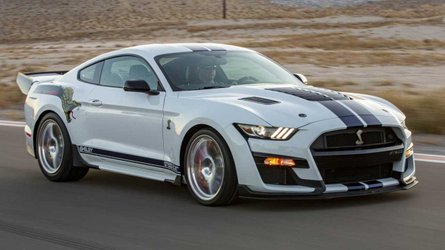 While it’s safe to assume that Shelby American will squeeze more power out of the GT500’s supercharged 5.2-liter V8 engine, it’s still too early to know where the final figure will land. A Ford representative told CarBuzz that Shelby American’s GT500 variant will have to produce “at least 1,000 [horsepower],” but Gary Patterson, president of Shelby American, told Motor1.com that such a figure was “very premature.”

“I think that’s somebody speculating and probably saying it off the cuff,” Patterson added.

Regardless of the final output, the Shelby American team will surely improve upon the already lauded GT500.

Although the company is still finalizing the name of the model, we have little doubt that Shelby American’s high-horsepower Mustang will attract the attention of enthusiasts of the Blue Oval's sports coupe when it’s finally available for purchase.