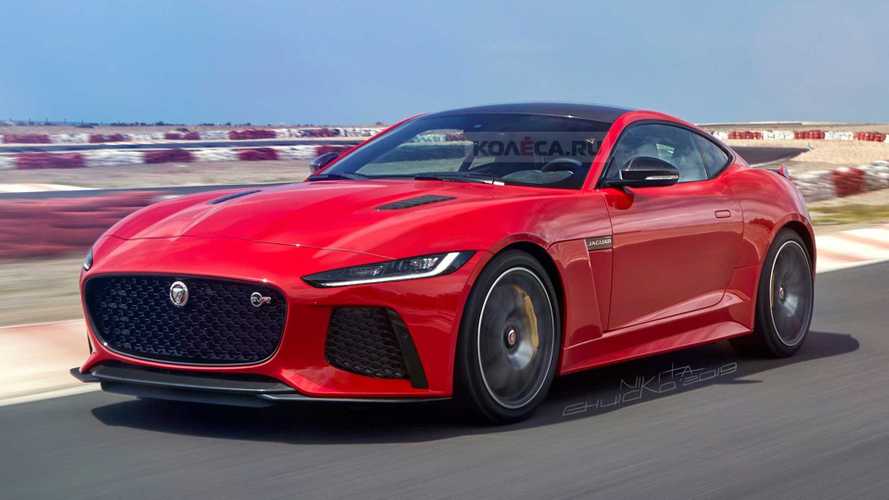 It could have a BMW engine underneath that vented hood.

Before the F-Type switches to a mid-engined platform – if that’ll ever happen – Jaguar will apply a nip and tuck to the current model as per numerous spy shots depicting camouflaged prototypes. Our good pals at Kolesa.ru have digitally removed the disguise in an attempt to figure out what the test vehicles were hiding underneath the heavy disguise.

The most obvious change observed on the cars that Jaguar was testing was noticeable at the front where we spotted a set of considerably slimmer LED headlights arranged horizontally lending the car a sleeker look. You can see them in this speculative rendering of the range-topping F-Type SVR with its massive air intakes and a carbon fiber roof. To enable a cleaner appearance, the front crossbar in the grille has been removed.

Being only a facelift rather than an all-new car, we wouldn’t hold our breath for any significant changes to the side profile since that would be too expensive to implement. It’s especially true given the F-Type’s rumored switch to a mid-engined layout, which would consequently mean the one with the engine up front will not be around for an extremely long time.

Minor changes are expected at the back as well where the taillights are set to receive new graphics to bring the F-Type in line with other recent products carrying the leaping feline badge. Jaguar nailed the design right from the beginning seeing as how the lovely C-X16 concept from 2011 foreshadowed what was to become the F-Type a couple of years later. Making huge changes to the car’s appearance would be a risky move, therefore the revised model is only going to receive moderate styling updates.

We’re expecting the refreshed F-Type to arrive sometime next year in both coupe and convertible flavors with a BMW-sourced engine to replace Jaguar’s supercharged 5.0-liter V8 for the flagship SVR. The interior cabin will be largely carried over from the current car, but there should be more technology like an updated infotainment system and a digital instrument cluster to keep up with the times.