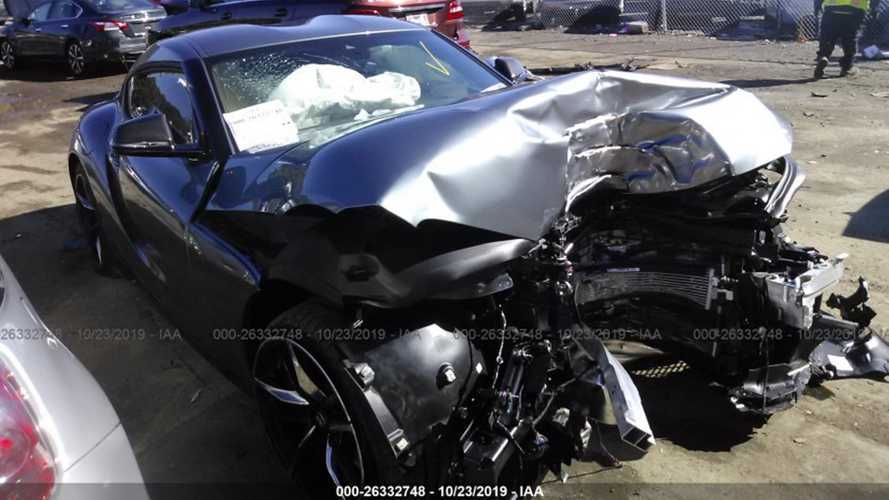 Being that it's basically half a car, you can probably get it for half the price.

A Facebook video posted by Joshuael Alexander Soto just yesterday appears to capture the final moments of this Supra on video. We can't be absolutely certain this is the same car, but how many Gray 2020 Supra Launch Edition models are out there with a U-shaped front end courtesy of a massive tree? Thankfully, it appears the occupants were okay.

Keen to score a deal on a new Toyota Supra? Here’s one that needs a bit of work, and by that, we mean pretty much everything from the dash forward. We’ve seen a few banged-up Supras since the A90 reached dealerships earlier in the summer, but this is the first properly trashed example that’s arrived at a salvage auction. And it is quite a looker.

Have A Closer Look At The First Crashed 2020 Toyota Supra

The car – or what’s left of it – is in the hands of Insurance Auto Auctions. It’s located at the company’s branch in Dundalk, Maryland, and before we get any further into this discussion, there’s no price listed. Being an auction, the final price will be left to the bidders but there’s no indication of a starting price so that begs the question – what’s a wrecked 2020 Toyota Supra Launch Edition worth?

We aren’t collision pros by any means, but fixing this car seems like a gargantuan task. Clearly it impacted something round and firmly entrenched – we’re guessing a tree – and damage reaches well into the engine compartment. As such, it’s quite possible the 3.0-liter inline-six isn’t salvageable either.  Photos show what appears to be the Supra’s core support pressed hard against the front of the engine, and even if there isn’t obvious damage to the block, we’d be wary about issues that could be unseen.

It appears the crumple zones did their duty, however. Aside from airbags everywere it looks like there was very little intrusion into the greenhouse. The auction description provides no information on the collision other than it was a front-end crash, but we so reason why seat-belted occupants couldn’t have come through this ordeal with minor injuries.

Arthur Can Fix It:

Wrecked Audi Q5 Looks Good As New; Might Give You Trust Issues
⠀

If there isn’t hidden damage further back (that’s a big if), and if the unibody isn’t terribly twisted, this might actually be a good candidate for a 2JZ-swapped race car build. With the engine and hood out of the way, the frame rails in front could be yanked back into position. Gut the interior, fit the 2JZ, get fresh bodywork up front, and this demolished sports car could have a second life for someone with some skills. And if it goes cheap, the build might not be that expensive. Ultimately, this will probably end up being a parts car but hey, we’ve seen some pretty devastated cars come back to life. Some very recently, in fact.

The 2020 Toyota Supra launch edition hit dealerships earlier this year with an MSRP of $55,250. What do you think this wrecked example will bring on the auction block? If you want a crack at it yourself, hit the IAAI source link below for details on how to bid.