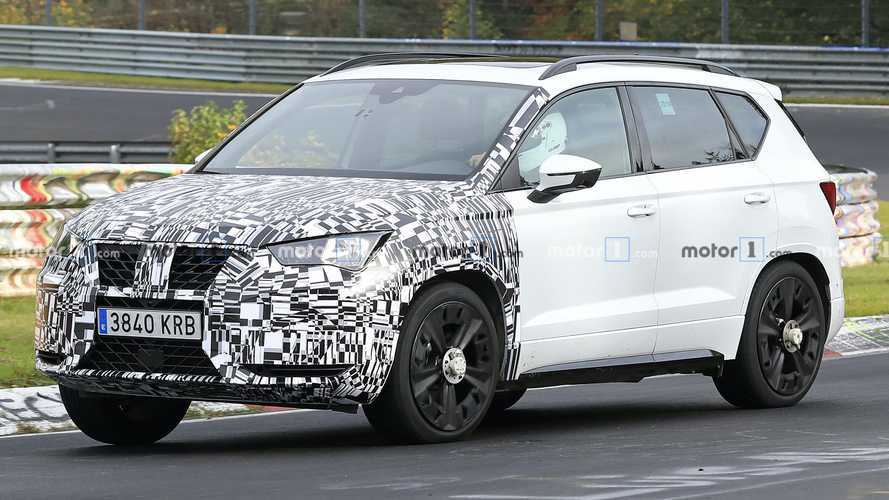 Calling this a mild refresh would be an understatement.

It was at last year’s Geneva Motor Show when Cupra, SEAT's now standalone performance brand, introduced its first model – the Ateca. The Cupra Ateca hasn’t been around for a long time, but that doesn’t mean Cupra is resting on its laurels. New spy photos show the Ateca is due for a mid-cycle refresh, and it looks to be a mild one at that.

What's Cupra Cookin' Up Next?

The camouflage hides the Ateca’s front clip from the A-pillars forward. The rear, which often features a few design changes, is left uncovered except for the badging. This refresh appears to be a mild one. However, it’s challenging to determine what changes Cupra plans on making to the Ateca’s design. It appears the test mule wears a new front fascia with a revised design; however, the hood and headlights appear unchanged. It seems the large air inlets are gone, but they could simply be hidden, too.

Powering the refreshed Ateca should be the same turbocharged 2.0-liter engine making the same 300 horsepower (221 kilowatts). It’ll likely pair with the same seven-speed dual-clutch automatic DSG gearbox while powering all four wheels through an adaptive all-wheel-drive system. That’s enough power to rocket the current Cupra Ateca from zero to 62 miles per hour (100 kilometers per hour) in 5.4 seconds, which is quick for a crossover. The top speed is limited to 152 mph (245 kph). Those are respectable performance numbers that should remain unchanged on the new model.

Much like the outside, the interior should receive only modest changes with the possibility of improved connectivity, too. It’s a modern cabin with modern features and doesn’t need an overhaul to remain competitive. This appears to be the mildest of refreshes, too, especially if the rear is left unchanged when the new model arrives for the 2021 model year.