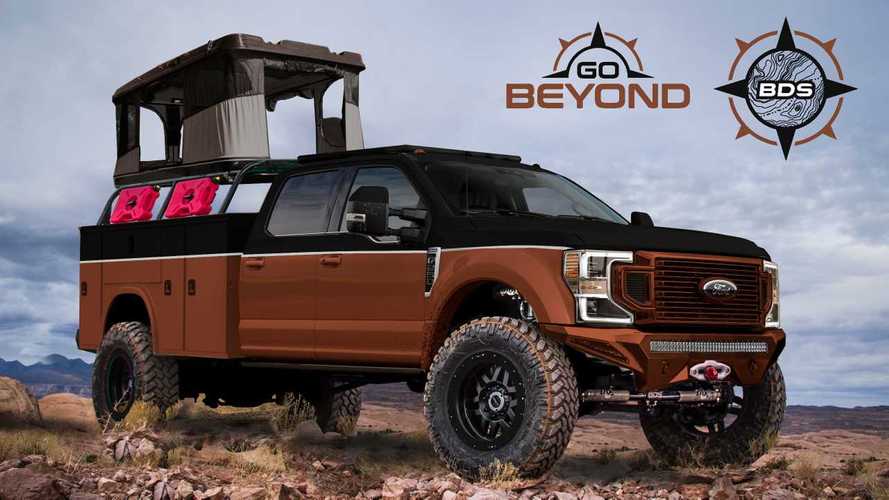 The lifted F-350 comes with 40-inch off-road tires and a hard-shell tent.

This year’s SEMA show in kicks off in 12 days from now, and we have a pretty good idea of what we’ll see at the Las Vegas Convention Center since many companies have already previewed their goodies. After showing a bunch of modified SUVs, a Transit van and Ranger pickups in the past two weeks, Ford is now turning its attention to the F-Series Super Duty lineup.

Updated early February for the Chicago Auto Show, the 2020 Super Duty is heading to SEMA as a rad overland rig based on the F-350 Crew Cab XLT powered by the mighty 6.7-liter diesel V8 engine. Developed by BDS Suspension, the custom project is suitably called “Go Beyond” and features a four-inch arm lift and giant 40-inch off-road tires wrapped in 20-inch wheels.

What Else Is Ford Bringing To SEMA?

Up front, the new bumper incorporates a winch and a wide LED light bar that’ll come in handy should you plan on going on an off-road trekking adventure during the late hours. The F-350 is more interesting courtesy of a hard-shell tent and an aluminum service box to store all of your tools and whatnots necessary before embarking on a long trip on roads less traveled. The modified bed now contains everything you’d need from an overland rig: electric refrigerator, propane tank, gas grill with two burners, power inverter, air compressor kit (with air tank), and even a folding aluminum table with camp chairs.

Next up, CGS Performance Products has customized the F-250 Super Duty Crew Cab. They started off with the Tremor version equipped with the Black Appearance Package and installed 20-inch wheels with 37-inch tires for a better stance and improved traction. The truck has received a striking red paint finish and a bed cover for a cleaner look at the back where there’s also an aftermarket carpet kit.

The biggest workhorse of them all will be this F-450 Super Duty Platinum Crew Cab upgraded by DeBerti Design with extra LED lights, an air suspension, and huge 22-inch wheels wrapped in 37-inch Toyo tires. The main idea behind the project was to further enhance the truck’s storage capabilities, therefore a pull-out drawer has been installed in the bumper along with pull-out cabinets in the fenders.

LGE-CTS Motorsports went all out with this F-250 Super Duty Crew Cab XLT by replacing the stock bed with a modular flatbed complemented by a rear canopy. The truck has also received a variety of other upgrades, ranging from a rooftop tent and a roof rack to a 4.5-inch suspension lift kit and 18-inch wheels shod in chunky 37-inch tires. Miscellaneous items like a refrigerator (with freezer), camp chairs, lockbox, and 6.5-foot awning with LED illumination round off the list of upgrades.

The last of the five SEMA-bound Super Duty trucks is also the softest of them all since it’s essentially the F-250 Tremor Crew Cab with the Black Appearance Package. It does get a 2-inch lift at the front axle and 35-inch off-road tires all-around, while the Raptor-styled “Ford” Lettering and the earthquake graphics on the sides make it stand out a bit.