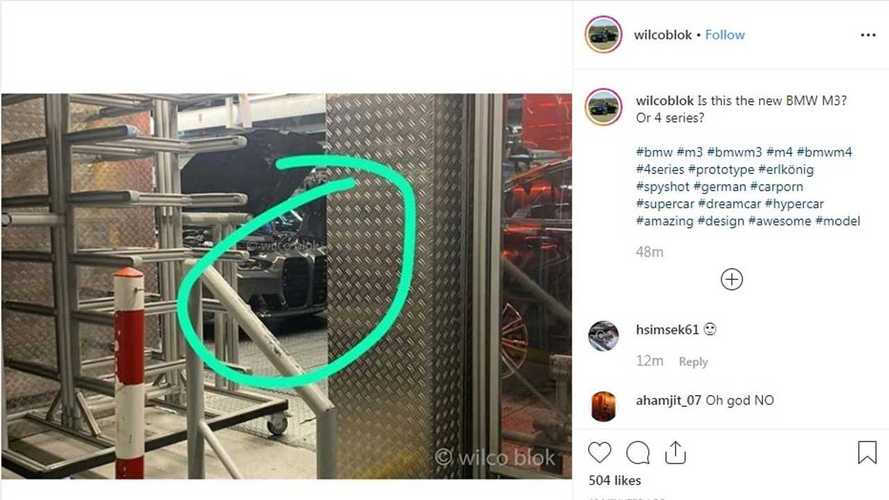 Love it or loathe it, the kidney grille is going through some drastic changes.

BMW is taking hit after hit this week in terms of leaks as shortly after someone published an image with the new M3’s rear end from within the factory, a similar image has now emerged onto the web courtesy of wilcoblok on Instagram. We’re inclined to believe this the next-generation 4 Series Coupe rather than the M3 judging by the vertical arrangement of the love/hate kidney grille. In addition, the sleek headlights are clearly different than the sedan’s clusters since they appear to be inspired by those of the 8 Series.

Let’s all remember that BMW did “warn” us about the controversial changes planned for its corporate grille with the unveiling of the Concept 4 last month at the Frankfurt Motor Show, so we wouldn’t call this new look a big surprise. That said, the oversized pair of kidneys is certainly going to be the focal point of the car – for better or for worse – and to some people the rest of the design won’t even matter.

Front grille aside, the generous air intakes indicate we could be dealing with a spicy version of the next-generation 4 Series Coupe, possibly the M440i. Alternatively, it could be a lesser trim with the optional M Sport package. Then again, that might be the fancy Urban Green paint we usually see on M3s and M4 as well as more recently on the X6 M. It’s difficult to pinpoint the exact shade of the car since the image’s quality is not exactly great. Either way, this doesn’t look like a base 4er.

See Our Own Spy Shots:

The production-ready 4 Series Coupe will probably be unveiled in 2020 together with the M Performance version (M440i), with the fully fledged M4 to arrive shortly thereafter. A droptop M4 – this time around with a fabric roof – is also on the agenda and it’s been spotted repeatedly undergoing testing. An M4 Gran Coupe has also been rumored, but we’ll just have to wait and see about that.