There’s a rather famous bridge in North Carolina. It’s not known for its length or beauty, nor is it an engineering masterpiece though we must admit, it’s exceptionally strong. Not only does it support the weight of trains as they pass over South Gregson Street in Durham, it’s endured untold collisions from hapless drivers in tall vehicles attempting to drive beneath it. Of course, we’re talking about the infamous 11-foot-8 bridge that has its own website and is the subject of viral crash videos on YouTube too numerous to mention. But it won’t be 11-foot-8 for much longer.

Watch Where You're Going: 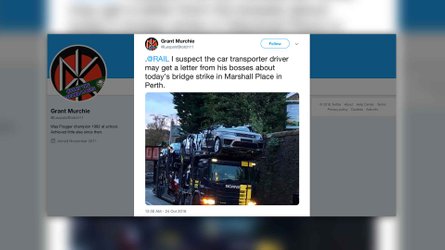 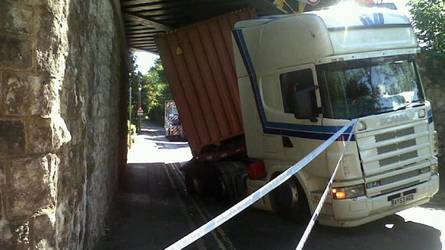 What The Truck?! Semis Hit Rail Bridges Five Times A Day In UK

A report from Huffpost.com says a construction project to raise the bridge is slated to begin on October 23 – tomorrow as of this posting – and wrap on November 5. The Durham Transportation Department announced the plan on Twitter, and if that sounds like a shockingly small about of time for bridgework, you’re not wrong. According to the report, the project isn’t exactly going to change the landscape in the area, as the bridge will only be raised eight inches.

Why such a small amount? Apparently, that’s all the further it can go without interfering with the gradient on the surrounding tracks. That would entail a much larger construction project, and the North Carolina Railroad Company is footing the full cost of this minor upgrade at $500,000. And it’s not as if efforts haven’t been made to keep tall vehicles away from the bridge – a laser-sighted warning system is presently in place that flashes warnings to approaching vehicles, and it triggers a red light to boot. The added measures slowed the frequency of accidents mishaps dumbassery, but even as recently as a couple of weeks ago, drivers making poor decisions were still clipping the span.

The big question is whether or not eight inches will make a difference in the number of collisions that occur at the low bridge. 13 feet 6 inches is the legal height for which trucks are allowed to operate without special permits, but the vast majority of victims at this crossing are rental box trucks. The extra height may save some of the smaller models, but anything over 20 feet in length likely still won’t fit.

In other words, look for a new 12-foot-4 website with more facepalm-worthy collisions coming soon.

Source: Huffpost via The Drive