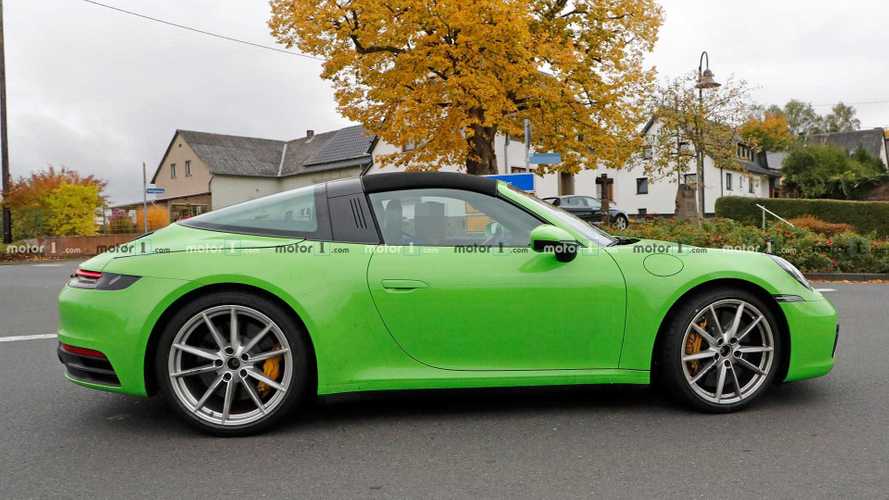 The green 911 looks fantastic against the orange leaves.

New spy shots catch the latest development of the 992-generation Porsche 911 Targa. Even if the open-roof model isn't your favorite, check out the gallery for some picturesque photos of the 911 cruising around Germany in the fall.

This 911 only wears a little camouflage at the rear. Porsche applies some tape over the badge and to the corners of the taillights. Otherwise, the is an unconcealed Targa. The overall styling is identical to the 911 Carrera models. The only major change is the roof's satin black panel and thick roll hoop behind it.

There are no images yet showing the Targa's roof in action, but the styling suggests that the mechanism is similar to the 991 generation. There's a seam along the rear deck where it would open and a complicated process lifts the roof into the back.

The cabin is likely identical to the 911 Carrera models, except for the extra switch to control the Targa top.

The powertrain should be the same as the Carrera range. This would give the vehicle a 3.0-liter twin-turbo flat-six engine making 379 horsepower (283 kilowatts) in the base trim or 443 hp (330 kW) for the hotter S trim. A GTS version of the Targa seems likely eventually, and rumors put its output above 460 hp (343 kW).

A debut date for the new 911 Targa is a mystery, but Porsche has a lot of variants of the model to unveil. Spy shots show the 911 Turbo, Turbo Cabriolet, GTS, and GT3 are deep into development, and some of them look as complete as the version in these photos.