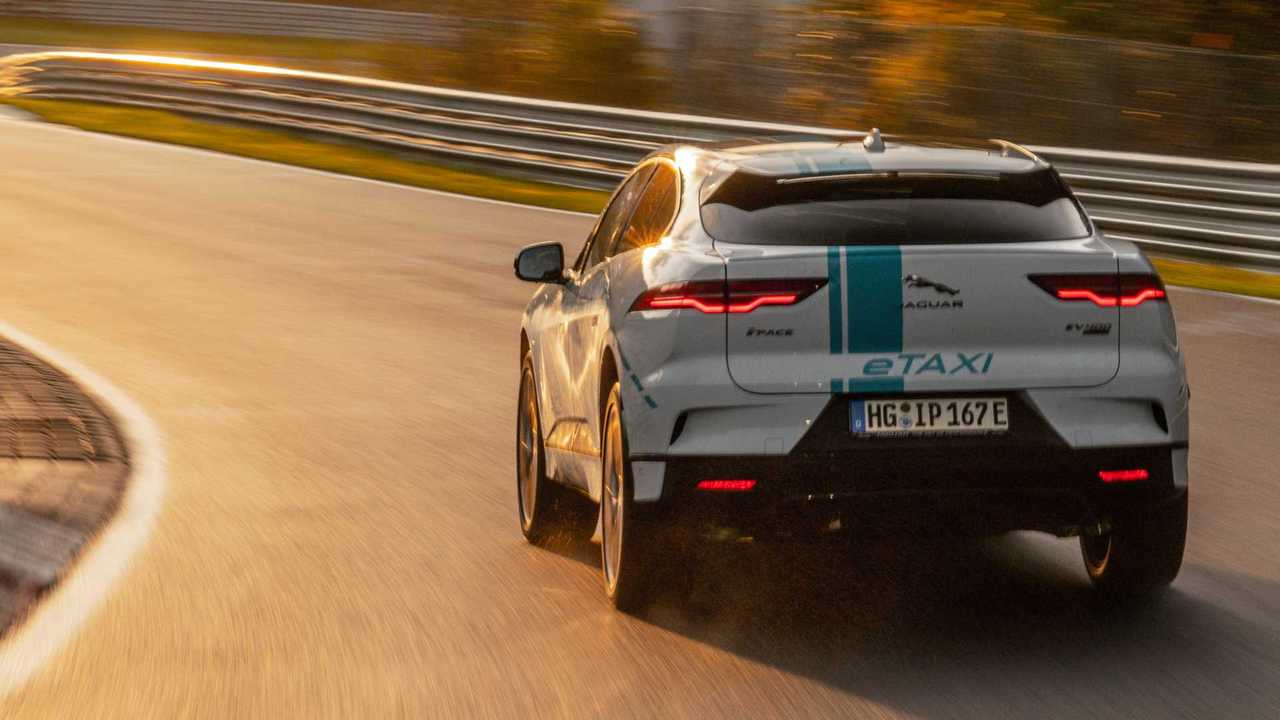 Buckle up for a silent passenger ride in the new I-Pace electric SUV.

The zero-emissions I-Pace SUV, which produces 395 horsepower and manages the sprint from 0-62 mph (100 km/h) in less than five seconds, is now available for passenger laps of the German circuit. The car joins the XE SV Project 8 sports saloon on the "Race Taxi" fleet, offering paying punters a choice of electric or supercharged gasoline V8 power.

For just €149 (about $166 at present exchange rates), you can ride shotgun as a professional driver tackles the Green Hell behind the wheel of the I-Pace. That’s 13 miles and 73 corners in a car that can travel at up to 124 mph (200 km/h) in a straight line, but doesn’t produce any exhaust emissions.

The I-Pace, which has won a raft of awards since its introduction last year, including 2019 World Car of the Year, uses a 90-kWh battery to power its brace of electric motors. That results in an official maximum range of up to 292 miles (470 kilometers, WLTP), although that’s dependent on a range of factors, including temperature and driving style.

It probably won’t manage anything like that around the Nordschleife, which has a reputation for being among the world’s most unforgiving race circuits. Any number of big names have found themselves in the walls, and plenty have been killed tackling the enormous track, which loops around a whole village. However, Jaguar is promising that the four-wheel-drive electric car will “ feel at home in all weathers” and “will be able to cope with any conditions the circuit has to offer”.

That car, which is much more of a rarity, set a lap time of seven minutes and 21 seconds back in 2017. That made it the fastest sedan ever to lap the track, until Jaguar returned earlier this year, armed with some stickier Michelin tires. The company shaved about three seconds from the lap time, making it a whole seven seconds faster than the next-best sedan - the Mercedes-AMG GT 63 4 Door.

Thrill-seekers and fans of electric vehicles can now experience the sports car performance of the I-PACE at the most demanding race circuit in the world with a professional driver behind the wheel. The zero-emissions model can accelerate from 0-100km/h in 4.8 seconds (0-60mph in 4.5 seconds) thanks to its state-of-the-art 90kWh lithium-ion battery, which develops 400PS and 696Nm of torque.

The performance SUV will feel at home in all weathers around the 20.8km, 73-corner Nordschleife thanks to its dynamic handling and all-wheel drive; the zero-emissions I-PACE – 2019 World Green Car of the Year – will be able to cope with any conditions the circuit known as the ‘Green Hell’ has to offer.

The introduction of the first all-electric RACE eTAXI is another step in Jaguar’s electrification strategy as it enables more people to experience Jaguar’s award-winning I-PACE first-hand.

Jaguar is no stranger to electric race cars, with the Panasonic Jaguar Racing team preparing for a fourth season in Formula E. Jaguar has also completed its inaugural season of the Jaguar I-PACE eTROPHY, the first all-electric single-make competition of its kind in the world, which features a grid of close-to-production I-PACE racers.

The new experience is available from now until the end of the season in late November and costs from €149 per lap. For further information on dates and availability please visit: https://www.jaguar.de/jaguar-live/race-taxi.html.