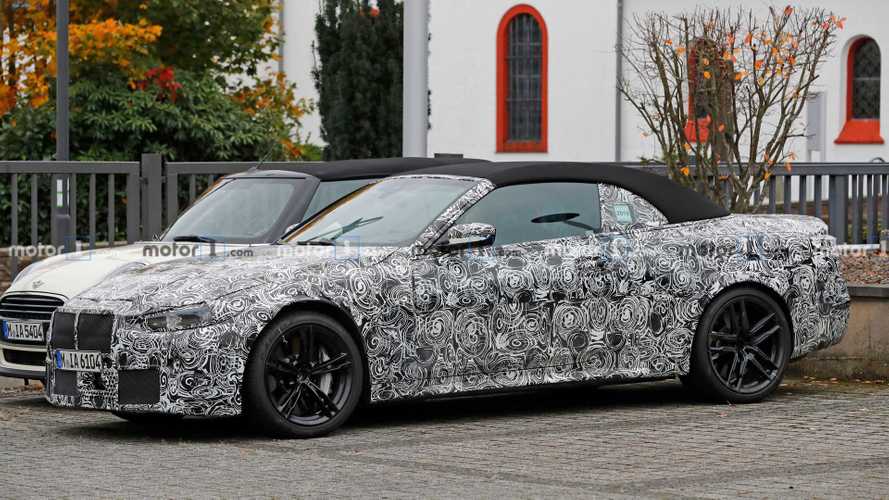 The grille is still hidden, but evidence suggests it's freaking huge.

We actually haven’t glimpsed prototypes for the new BMW M4 Convertible very often. Our first sighting was back in July, and this is only the second time we’ve caught the droptop in public. However, our spy crews found this particular test vehicle parked in BMW’s M test center at the Nürburgring, so we went in for a quick up-close look.

BMW Confirms New M3, M4 Leaks Are Legit, But Launch Is Far Away

The million-dollar question the world is asking right now is whether the M4 really has a gargantuan grille as previewed on the BMW Concept 4. The camera gets an exceptionally close look at the front of this test vehicle, and we can see just a bit of the grille’s top frame and yes, it mirrors the Concept 4’s design. To BMW’s credit, the extensive coverings obscure further detail but we will say this – the angled portions of the grille’s frame at the top appear to extend below the headlights, and that’s just the uppermost section. That would suggest there is indeed a big schnoz hiding behind the screens.

As for the rest of the car, we can clearly see the massive brakes front and rear, and we suspect they’ll be needed because the M4 will pack the same firepower under the hood as the forthcoming M3. To refresh your memory, that’s a boosted inline-six which will produce either 480 or 510 horsepower (358 to 380 kilowatts) depending on the trim level. However, a recent chassis dyno experience with an X3 M (which uses the same engine) suggests BMW is significantly underrating its power. That run delivered 491 hp (366 kW) to the wheels, which translates to 542 hp (404 kW) at the crankshaft. Yikes.

Whether the next BMW M4 actually gets that that much power, or if it will wear that insanely oversized grille, are questions that will be answered later. We expect to see the M4 debut next summer, with the convertible likely following a few months later.