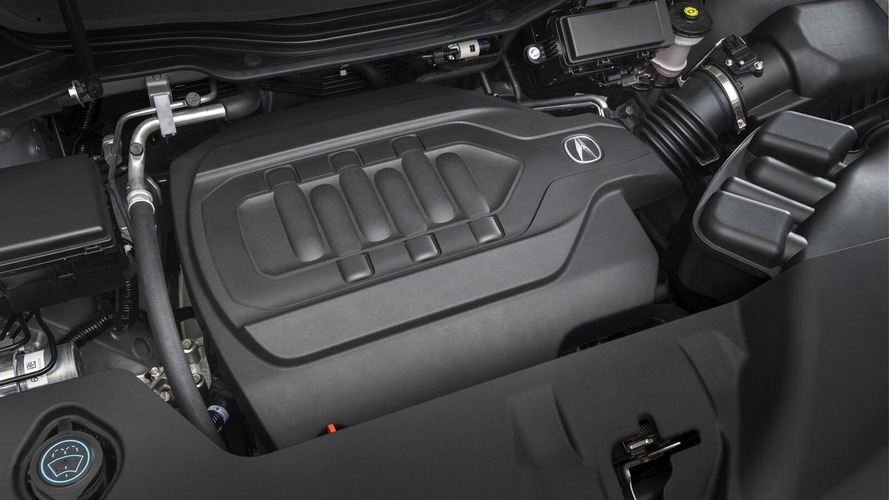 Following this morning's leak, Acura has officially unveiled the 2014 MDX at the New York Auto Show.

Recently previewed by a concept at the North American International Auto Show, the production model has an "Executive Aero Sculpture" design which features an angular front fascia, a sloping roofline and a curved rear hatch. The crossover also has "Jewel Eye" LED headlights, chrome accents and a tailgate-mounted spoiler.

The cabin has a restrained design but comes nicely equipped with leather seats, metallic trim and wood grain inserts. There's also an upgraded audio system and second-row "One-Touch Walk-In" seats that automatically fold and slide forward, at the push of a button, to improve access to the third row. Like the RLX, the MDX has two digital displays that reduce the number of buttons on the center stack. Options include climate-controlled seats, second-row sunshades and a rear seat entertainment system with either a 9- or 16.2-inch display.

Power is provided by a 3.5-liter V6 engine that produces 290 bhp (216 kW) and 267 lb-ft (362 Nm) of torque. It is connected to a six-speed automatic transmission which can be paired to an optional Super Handling All-Wheel Drive (SH-AWD) system. Acura declined to release detailed performance specifications, but said the SH-AWD variant beat the previous model's Nürburgring lap time by eight seconds. In terms of fuel-efficiency, the MDX should return 18 mpg city / 27 mpg highway / 21 mpg combined with all-wheel drive and 20 mpg city / 28 mpg highway / 23 mpg combined with front-wheel drive.

The 2014 MDX will go on sale this summer and pricing will be announced closer to launch.