New Mercedes-AMG C63 To Be A Four-Cylinder Plug-In Hybrid? 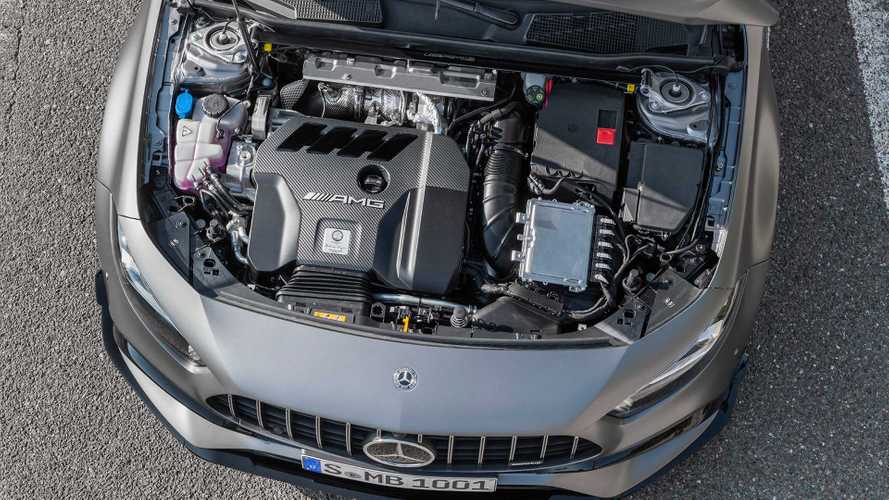 Not a fan of downsizing? Get the twin-turbo 4.0-liter V8 while you still can.

It’s a known fact by now that the next-generation Mercedes C-Class and S-Class in AMG flavors are going to adopt a plug-in hybrid powertrain. The reveal was made by Affalterbach’s boss Tobias Moers last month in an interview during which he also confirmed plans for an amped-up hybrid GT to rival the Porsche Panamera Turbo S E-Hybrid.

In a separate interview, the very same Tobias Moers admitted the new four-cylinder 2.0-liter turbocharged engine (pictured above) powering the A45 and CLA 45 could be installed in larger models. Putting two and two together, we’re not entirely surprised that Autocar is now reporting the new C63 could switch to an electrified four-pot.

Eschewing the twin-turbo 4.0-liter V8 of the current-gen C63, the new performance model from Mercedes could use an adaptation of the M139 unit powering AMG’s compact cars. In those vehicles, it produces as much as 416 horsepower and 369 pound-feet (500 Newton-meters) of torque, and an electrified version could pump out even more muscle.

According to Autocar, the engine will allegedly boast a 48V integrated starter motor in the same vein as the one used by the larger inline-six M256 unit found under the hood of the CLS 53. In the swoopy sedan, the electrified component adds 22 hp and 184 lb-ft (250 Nm), but AMG is looking to upgrade the system and squeeze out “significantly more power” for the next C63.

Despite losing half of its cylinders, the C63 is expected to match the 503-horsepower of the current model in "S" guise while gaining 37 lb-ft (50 Nm) of torque to deliver 553 lb-ft (750 Nm). Even with the added hybrid hardware, the entire powertrain is expected to weigh less than the M177 installed in today’s C63.

Mercedes Is Adding Electrification And AWD To Its C63:

Switching to a four-cylinder unit is not the only big change Mercedes-AMG is preparing as the C63 sedan, coupe, and convertible will employ a 4Matic all-wheel-drive system. Purists will at least take comfort from knowing a Drift mode similar to the E63’s will send all power to the rear axle by decoupling the front driveshaft.

The regular C-Class Sedan (W206) is rumored to debut at the 2020 Paris Motor Show next September, so don’t expect to see the revamped C63 sooner than the second half of 2021. Once again, there’s also going to be a lesser AMG version, but likely not today’s C43 as Mercedes will introduce a C53 with a de-tuned version of the C63’s electrified powertrain.