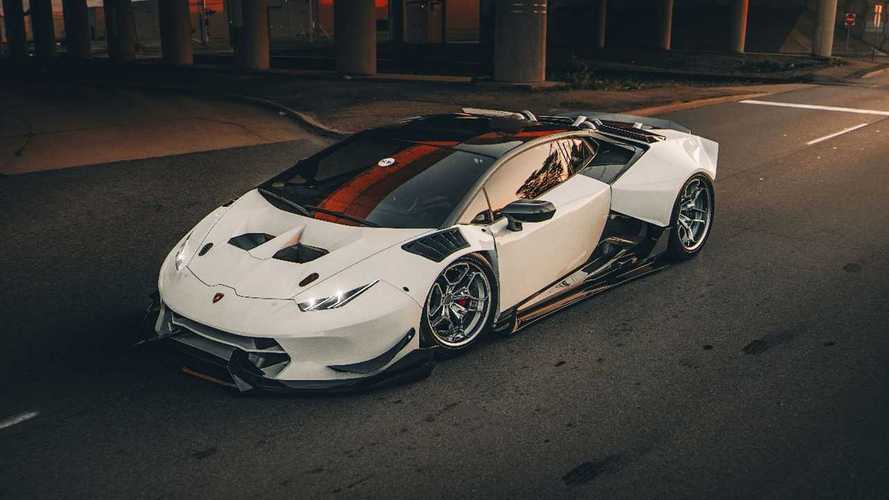 It also gets a manual gearbox, and it will debut at the 2019 SEMA Show.

The 2019 SEMA Show is coming up fast, and there are always amazing machines and impressive projects worthy of attention. This year our interest is piqued by a particular creation that’s rather ambitious, and by that, we mean epic on a galactic scale. That’s because it involves an Italian supercar, American V8 power, a manual transmission turning the rear wheels, and the craziest thing of all – fire.

Jaguar E-Type Found In Pieces To Be Rebuilt
⠀

Folks who follow B is for Build on YouTube know what we’re talking about. For the last few months, the channel has been filled with clips showing a 2015 Lamborghini Huracán LP 610-4 getting fresh body panels and a monster twin-turbo LS V8 good for 1,500 horsepower ... at the wheels. That’s right, this Lambo is ditching its high-revving V10 for a single-cam V8 built in Texas, but before you go screaming sacrilege, know that this car shouldn’t even exist in the first place. Four months ago it was literally a smoking mess, having burnt to the point where the engine was barely recognizable, never mind salvageable. By all rights, this Lamborghini was dead.

Enter Chris Steinbacher, the man behind B is for Build. He wanted to create a unique Lambo, and this burnt-out shell proved to be a good starting point despite the carnage. The channel chronicles the project from the beginning –  and we do mean very beginning – and it progresses through the big 7.0-liter V8’s installation in the rebuilt chassis. An Audi R8 manual gearbox handles the shifting, and aside from the litany of custom bodywork courtesy of a design by Khyzyl Saleem, the reborn Lamborghini wears panels taken from a Huracán Super Trofeo.

The YouTube channel leaves off with the engine going into the car, but judging by the press photo we received, the V8-powered Huracán is dialed in and it’s quite the looker – especially when you consider this was a burnt shell just a few months ago. The car will make its official debut at the Las Vegas Convention Center on November 5.

WHAT: Garrett - Advancing Motion will be pulling the cover off an unprecedented custom vehicle built by YouTube personality Chris Steinbacher of B is for Build at the 2019 SEMA Show. The 2015 Lamborghini Huracan was purchased as a fire-damaged bare shell and has been transformed into the world’s first manual transmission, LS-powered, twin-turbocharged Huracan. The vehicle is equipped with a 430 cubic inch Texas Speed LS engine, twin Garrett GTX3582R Gen II turbochargers and a Graziano transmission from an Audi R8. The body of the vehicle has been modified based on a Khyzyl Saleem design and outfitted with carbon fiber body panels from a Huracan Super Trofeo.

Garrett - Advancing Motion will also be hosting a meet and greet with Chris and the B is for Build team at the booth Wednesday, November 6th from 3-5 p.m.

To see the unveiling live, tune into the Garrett - Advancing Motion Facebook page at 2:00 p.m. on November 5th.