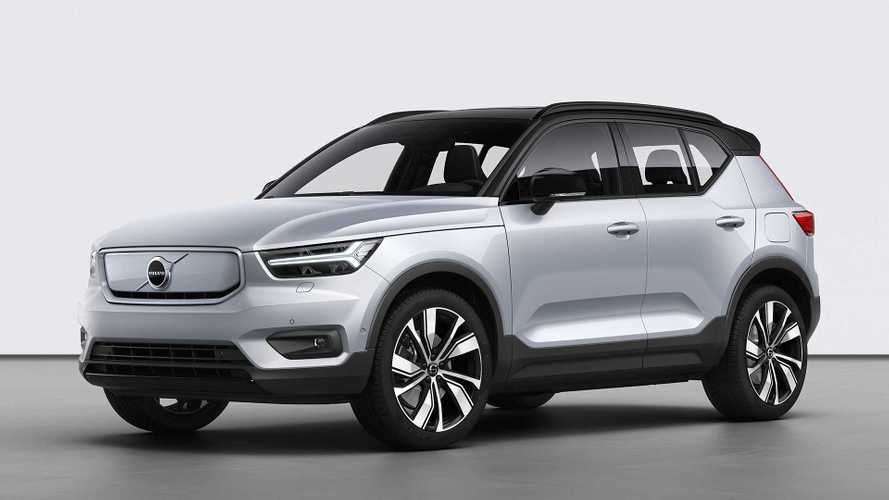 It offers 408 horsepower from an all-wheel-drive electric powertrain.

UPDATE: Motor1.com has a person attending the XC40 Recharge's launch, and we have a few new details about the electric crossover. The battery had a 78-kilowatt-hour capacity, and 75 kWh of that amount is usable. In addition, the electric motors produce a total of 487 pound-feet (660 Newton-meters) of torque. Check out some live photos from the debut in the gallery, too.

The Volvo XC40 Recharge arrives as the fully electric version of the brand's compact crossover. It's the brand's first EV with mass availability after previously toying with electrification with vehicles like the C30 Drive Electric.

The XC40 Recharge has a range of over 249 miles (400 kilometers) in the WLTP test cycle. The all-wheel-drive electric powertrain has motors powering each axle and produces a total of 408 horsepower (304 kilowatts). When using a fast charger, the system can recoup 80 percent of the capacity in 40 minutes.

The model looks similar to the XC40 packing a combustion engine but with a few styling tweaks. The grille is now closed, except for a small slit at the bottom. For color contrast, the lower fascia, mirror caps, and roof are black. The exterior is available in the new color Sage Green. The switch to an electric powertrain opens up room under the hood, and there's now a spot for cargo in there.

On the inside, the XC40 Recharge looks largely identical to other models in the range. It adopts Volvo's new Android-powered infotainment system. It includes support for Google Assistant, Google Maps as well as the Google Play Store. Over-the-air updates let the software gain features and improvements over time.

Recharge will be Volvo's branding for its future EVs and plug-in hybrid models. The company intends to introduce a new electric vehicle every year for the next five years. The goal is for EVs to account for 50 percent of global sales by 2025, and the rest would be hybrids.

Future Volvo customers will need to answer one fundamental question: do you want a new Volvo with a cord or without one? Today Volvo Cars introduces the XC40 Recharge, the company’s first ever fully electric car and the first model to appear in its brand new Recharge car line concept.

The XC40 Recharge, based on the multi-award-winning and best-selling XC40 small SUV, is the first of a family of fully electric Volvos. It represents a true milestone for Volvo Cars: the company’s first electric car and the first Volvo with a brand new infotainment system powered by Google’s Android operating system.

Over the next five years, Volvo Cars will launch a fully electric car every year, as it seeks to make all-electric cars 50 per cent of global sales by 2025, with the rest hybrids. Recharge will be the overarching name for all chargeable Volvos with a fully electric and plug-in hybrid powertrain.

From early 2020 customers entering the Volvo Cars website will first be asked whether they want a Volvo Recharge car or not. Financial incentives designed to further encourage electric driving will also be part of the Recharge offer.

“We have said this several times before: for Volvo Cars, the future is electric,” said Håkan Samuelsson, chief executive. “Today we take a major new step in that direction with the launch of our fully electric XC40 and the Recharge car line.”

The XC40 Recharge is everything customers expect from a Volvo, with the addition of a state-of-the-art, fully electric all-wheel drive powertrain that offers a range of over 400 km (WLTP drive cycle) on a single charge and output of 408hp. The battery charges to 80 % of its capacity in 40 mins on a fast-charger system.

The Android-powered infotainment system is fully integrated with Volvo On Call, the company’s digital connected services platform. Via Volvo On Call plug-in hybrid drivers can track how much time they spend driving on electric power.

To meet the anticipated growth in demand for its Recharge cars, Volvo Cars will triple production capacity for electrified cars and will as of next year prepare a Designer’s Choice selection of popular Recharge models, offering the potential for radically reduced delivery times. Volvo Cars aims for plug-in hybrid cars to make up 20 per cent of total sales in 2020.

Every Volvo model in the range includes a Recharge option, from the small XC40 SUV via the 60 Series cars to the company’s flagship, the large XC90 SUV. Volvo Cars is the only car maker to offer a plug-in variant on every model in its line-up.

The XC40 Recharge and the Recharge car line are also tangible proof points of the company’s ambitious new action plan, also launched today, which represents concrete actions in line with the Paris climate agreement and supports Volvo Cars’ ambition to become a climate-neutral company by 2040.