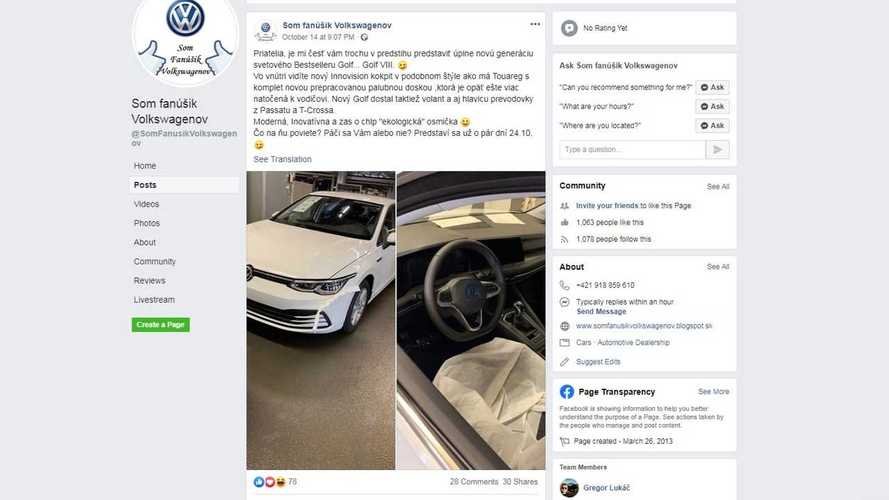 Over the last few months, we’ve seen our fair share of spy shots with the next-generation Volkswagen Golf, but these new ones are probably the best since there’s no camouflage on the car whatsoever. As a bonus, we can also take a peek inside what looks to be the cabin of a pre-production vehicle, meaning that what you see is likely what you’ll get once the car will be available for order.

The adjacent images were published by a VW fan page on Facebook and while the accompanying caption doesn’t say anything about the whereabouts, we’re inclined to believe they were taken at the factory or in a warehouse as there seem to be other VWs nearby. We’re likely looking at a lower-end trim level judging by the relatively small alloy wheels and the lack of front parking sensors, but the real story here is that the exterior design is exposed.

As seen in our spy shots of the plug-in hybrid GTE prototype a while ago, the new Golf will feature a completely redesigned set of headlights with “eyebrows” that extend to the corners of the front bumpers. A unified lower front grille is noticeable on this white example, as is the slimmer upper grille holding the new VW corporate logo that debuted last month on the ID.3 electric hatchback.

While we don’t get to see what’s going on at the back, we have plenty of our own spy images indicating VW has only made subtle cosmetic tweaks by discreetly updating the taillights and changing the look of the bumper. You’ll likely have to be a diehard Golf fan to notice these modifications right away, but that’s how it has always been with this car – a subtle evolution from one generation to another. Never mind those ungainly taillights, because those are just stickers to conceal the real clusters.

The other image posted on the VW fan page shows what looks to be the Innovision Cockpit first seen on the latest-generation Touareg SUV not available in the United States. The fully digital instrument cluster is joined by the large infotainment system to create the illusion of a giant screen, with the display on the center console angled towards the driver. To the driver’s left side, a panel that blends with the instrument cluster holds the controls for the defroster and some other functions we can’t make out because of the image’s low resolution.

The lower center console appears to be relatively simple without anything noteworthy. The gear lever for the six-speed manual gearbox takes up a significant amount of space, as do the two cup holders between the seats. Other items we notice include the silver start/stop button and two black controls, with one of them likely being the electronic parking brake since we’re not seeing a conventional brake lever.

The side air vents have a flat and slim design, while the ones in the middle are slightly thicker. Between the central air vents and the infotainment system appears to be a stack of touch-sensitive buttons, but we only know this because of an older spy shot (see above) revealing what we think are the controls for the climate system.

The wait is nearly over as VW will unveil the new Golf in a week from tomorrow, on October 24.