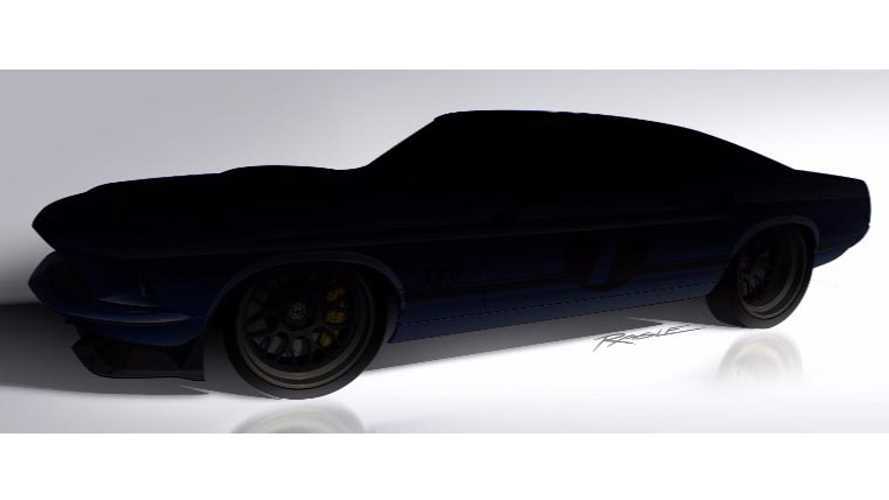 The Camaro apparently takes some inspiration from Norse mythology.

Ringbrothers has a second vehicle to debut at this year's SEMA Show. The black image provides a glimpse at the 1969 Ford Mustang Mach 1 that the crew calls UNKL. In addition, the company releases a similarly dark picture providing a full look at the firm's custom Chevrolet Camaro that goes by Valkyrja. A revised version of the Cadillac ATS-V-based Madam V that looks like a 1948 Cadillac goes on display, too. The company claims that these machines are the team's "most extreme builds to date."

The 1969 Mustang Mach 1 UNKL has a widened body and what Ringbrothers calls "a unique race-inspired theme" without offering any further clarification. Power comes from an 8.521-liter (520-cubic-inch) V8 from builder John Kaase.

Valkyrja is the Old Norse word that valkyrie derives from. The Wikipedia entry indicates that is means "chooser of the slain" by combining the words valr, meaning the slain on the battlefield, and kjósa, meaning to choose. Given the menacing term, this Camaro is probably a mean machine.

Ringbrothers indicates this highly modified Chevy has an extended wheelbase and widened body. Judging by the teaser image, there's some interesting styling at the front end. It might be a cowl hood but is hard to tell for sure from this dark picture. An earlier shot (below) indicates that the body wears lots of carbon fiber. Power comes from a 6.817-liter (416-cubic-inch) V8 engine from Wegner Motorsports.

Ringbrothers doesn't specify what changes it is making to the Madam V. The original debuted at the 2016 SEMA Show with a body looking like a '48 Caddy but an interior and powertrain from an ATS-V.

All three of these vehicles will premiere at SEMA on November 5. The Camaro's unveiling will be at the BASF booth at 9:30 AM local time. The sheet will come off the Mustang Mach 1 at the Flowmaster Booth at 11:30 AM, and the Madam V will be on display at the Ringbrothers booth from the time the show opens.


Who: You’re invited to attend two new vehicle debuts from the Ringbrothers at the 2019 SEMA Show.

What: Ringbrothers will unveil its 1969 Chevrolet Camaro known as “VALKYRJA” and its 1969 Ford Mustang Mach 1 named “UNKL” at the SEMA Show. The 1969 Camaro has been extensively modified including a widened body, extended wheelbase and the addition of a Wegner 416 cubic inch LS Engine. The Mach 1 Mustang is also widened and features a unique race-inspired theme with a John Kaase 520 cubic inch BOSS engine. In addition to the Camaro and Mustang, Ringbrothers will also be bringing back a revised version of its 1948 Cadillac known as “Madam V,” a modern Cadillac ATS-V with the styling of a vintage '48 fastback coupe. The Cadillac is powered by a 3.6L twin-turbocharged V6 mated to an 8-speed automatic gearbox

The Madam V Cadillac will be on display throughout the SEMA Show at Ringbrothers booth #23283 in the Hot Rod Alley section of the Central Hall.