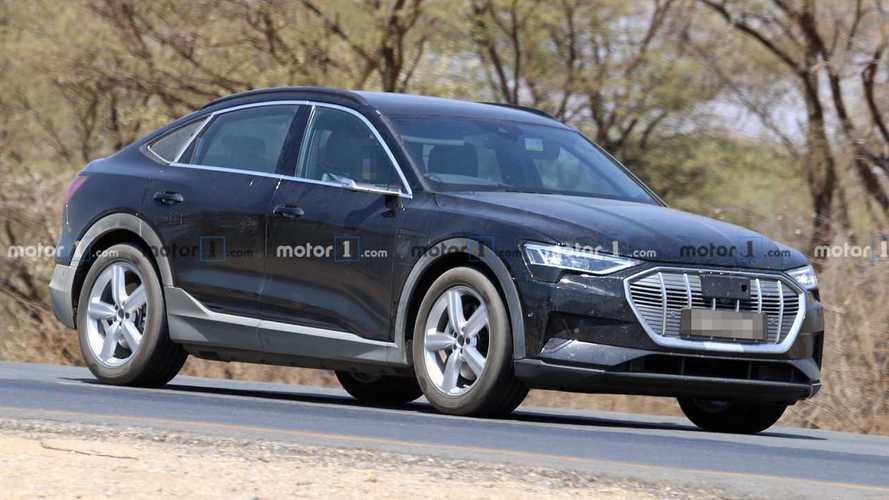 The official debut is slated for November 19.

We’re fairly sure you weren’t expecting the Sportback version of Audi’s fully electric E-Tron to look significantly different than the conventionally styled model, so these spy shots only come to confirm our hunches about the mild design changes. It’s less glitzy than the namesake concept unveiled more than two years ago, but it does add a bit more pizzazz compared to the normal E-Tron.

Teased with near-production prototypes at the Geneva and Frankfurt auto shows earlier this year, the E-Tron Sportback can be seen with very little camo, although the relatively small quarter glass appears to be hiding behind a plastic panel. The test vehicle was built in a right-hand-drive configuration and equipped with the optional side cameras replacing the traditional mirrors. Inside, there was a pair of seven-inch screens positioned above the door handle to mimic the placement of the old-school side mirrors.

As with just about every other Sportback model from Audi, the sleeker E-Tron has a more sloped roofline ending with a slightly sportier rear – all for the sake of extra style at the expense of practicality since rear headroom and cargo capacity are likely to take a hit. It does look a tad more exciting than the regular model, but customers will have to decide whether the updated bodywork justifies what will surely be a premium over the normal E-Tron from where the new Sportback will borrow just about everything.

Rekindle With The 2017 Concept:

There’s some black tape on the tailgate because Audi wasn’t willing to show the prototype’s full-width light bar connecting one taillight to the other. How do we know it’s there? Because the E-Tron Sportback revealed earlier this year in pre-production form had the light bar exposed. It won’t be the first SUV from the Four Rings to feature this setup as the standard E-Tron and the Q8 already have the extra-wide taillights, along with cars like the A8 flagship sedan and the gorgeous A7 Sportback.

Mechanically, everything should be borrowed from the standard E-Tron. That means power will be rated at 402 horsepower (300 kilowatts) and an instant 490 pound-feet (664 Newton-meters) of torque, but with spy images possibly showing an E-Tron S, the Sportback could also gain more electric muscle further down the line.

Audi has announced it will unveil the production-ready E-Tron Sportback on November 19 at the Los Angeles Auto Show.