Jeep Wrangler Stormtrooper Spied Doing Nothing Wrong For The Empire 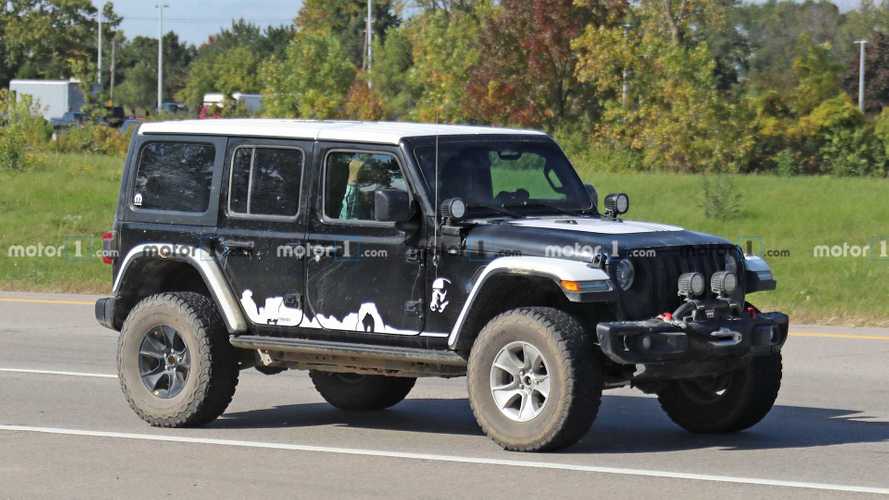 Could a Star Wars-themed Wrangler Stormtrooper Edition bring balance to the Force?

We’ve seen a few movie-themed vehicles from automakers through the years. Nissan had a love affair with the Star Wars franchise for a while with its conveniently named Rogue crossover, back when Rogue One: A Star Wars Story came out. Jeep has a sponsorship deal with Disney and Star Wars, and we’re not sure if this recently spotted Wrangler Unlimited is connected to that at all. But with arguably the biggest Star Wars flic of them all just a couple months away, this could actually be a thing.

How do we know this isn’t some innocent aftermarket thing? For starters, there’s a manufacturer’s license plate clearly visible on the back, so this is a Wrangler that belongs to Fiat-Chrysler Automobiles. As for the decals, there’s obviously a Stormtrooper helmet on the fender, with some kind of landscape depicted along the side. White fenders, a white roof, and a white rectangle on the hood with graphics we can’t identify complete the bulk of the aesthetic changes.

There are some other clues, however, that warrant further scrutiny. We can see what looks like a small Stormtrooper badge on the back, just to the right of the spare tire. There’s also a Mopar sticker on the passenger-side rear glass, and if you look at the landscape graphics, you can easily see the outline of a classic WWII-era Willys MB and the year 1941. That’s when the machine went into production, giving birth to the Jeep moniker in the process. It wears a bit of extra kit, namely with off-road lights mounted on the front bumper and near the base of the A-pillars. Lastly, there are several spots along the side – notably in the center of the fenders and around the rear door handle – that could’ve been attachment points for camouflage.

What does all this mean? It’s possible a Stormtrooper package could be part of a Mopar Parts upgrade, timed to play off the release of The Rise Of Skywalker in December. As for the old Jeep and the 1941 reference, here’s another theory. 2021 will be the Jeep’s 80th anniversary. Could FCA be planning a special edition model that somehow includes both the 2019 film and the 2021 anniversary? If Jeep pushes the release of such a package to at least the spring of 2020, it could pass as a 2021 model.

This sighting certainly leaves us with more questions than answers, but with the Los Angeles Auto Show hitting just three weeks before the new Star Wars flic, odds are good we’ll learn something by then.