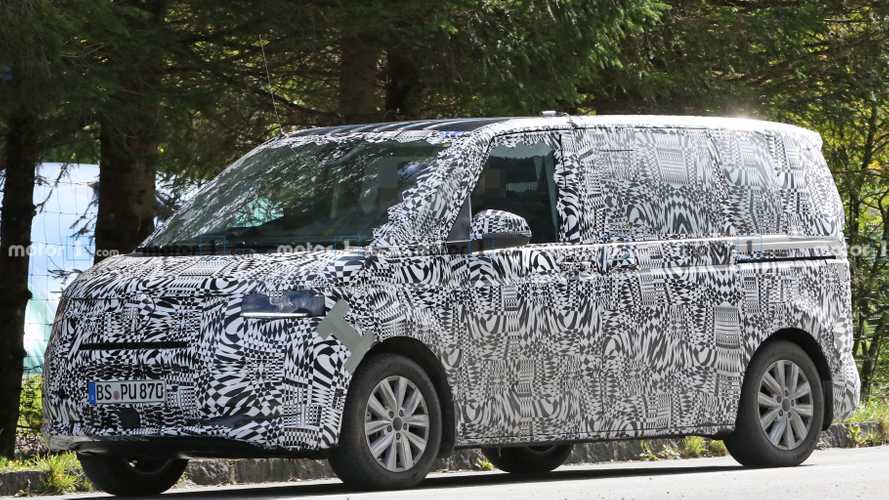 It's the first time we've seen the T7's skin.

There’s a new Volkswagen Transporter on the way, and this is sort-of our first look at it. We say that because our spy team has glimpsed T7 test mules a couple of time in the past, but being test mules as opposed to prototypes or preproduction models, they were shod with the current-generation T6 body. We now have two new batches of spy shots, making this the first time we’ve seen actual T7 skin over the new underpinnings.

The New T7 Transporter Is Coming:

It’s not quite as lucrative as it sounds, since the T7 is still well-covered in full-body camo wrap. And we’re dealing with a van, so it’s not as if there will be super-interesting design characteristics on the side or back. We can get a taste of the front fascia, however, where we see evidence of a grille positioned well below the headlights.

It’s hard to tell if the T7’s A-pillars are really thick or if details are obscured by false panels. Several different prototypes are caught in these photo groups, and the camera angle on some suggests there might be a small window ahead of the A-pillar, at least on some models. At the rear, the window appears a bit smaller, and new taillights have a more horizontal orientation. Some of the shots even manage to grab a glimpse of the T7's interior, though it's very much a rough-around-the-edges prototype with what looks like a mishmash of current-gen items and placeholder panels.

The bodywork is new to us, but the T7’s fresh underpinnings have been in the testing phase for quite a while now. When this van launches it will ride on VW’s MQB platform with provisions for driving just the front wheels, or all four. Sources tell us it will also be available in standard or long-wheelbase format, and yes, hybrid powertrains are expected. For that matter, a fully electric T7 is likely, though traditional vanlifers should still be able to get gasoline or diesel engines as well.

Our first test mule sighting occurred nearly a year and a half ago. Volkswagen is certainly making progress on the T7’s development, but we still don’t expect to see the new van revealed for at least another year, if not two.