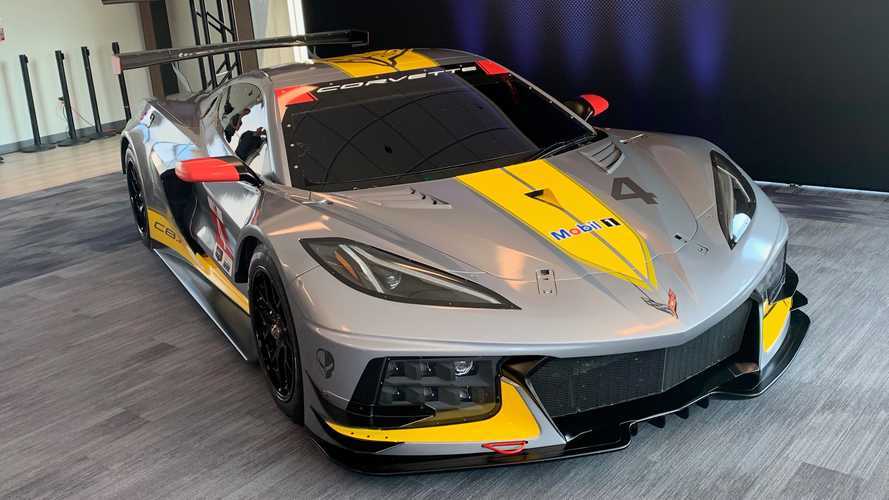 The flat-plane crank, 500-horsepower engine makes its debut in January.

This weekend at Petit Le Mans in Atlanta, Georgia, the Chevrolet Corvette C7.R hits the track for the final time. But don't fret, Corvette Racing faithful, because its successor is already here. Chevy showed its new-and-improved C8.R at an event ahead of the C7.R's farewell in Atlanta and provided some juicy details to go with it.

We now know officially that the Chevy C8.R will make its track debut next year at the Rolex 24 at Daytona in January at the opening round of the 2020 IMSA WeatherTech SportsCar Championship, confirming earlier reports. The C8.R will use a mid-mounted, flat-plane crank 5.5-liter naturally aspirated V8, restricted to 500 horsepower (373 kilowatts) and 480 pound-feet (651 Newton-meters) of torque in compliance with IMSA rules. That's 10 more horses and lb-ft than the road-going base C8.

As Jalopnik learned at the debut, FIA rules require a minimum of 300 copies of that race engine for road use. It’s highly likely that we’ll see that same V8 in use on a road-going C8. The yet-to-be-announced Z06 is a potential candidate.

All that extra power is paired to a smaller Xtrac six-speed sequential gearbox, which leaves room in the rear for a racing specific diffuser. Of course, the C8.R is lower and stiffer than the road-going C8 with which it shares its base, and with some help from Michelin, rides on custom 18-inch Pilot Sport GT competition tires.

Technically speaking, this is the first brand-new race architecture for the Corvette since 1999; even the C7.R utilized many C5 elements. But the C8.R shares a higher percentage of parts with the road-going C8 than most of its predecessors – and Corvette Chief Engineer, Ed Piatek, is excited to see those ingredients carry over to the track.

More On The Racing C8:

Watch The Corvette C8.R Hit The Track For The First Time
⠀

"It was important for us to develop the new race car alongside the production car, so that each product could properly take advantage of the new architecture," Piatek told Motorsport.com. "The benefits of this mid-engine supercar, including its incredible balance and connected-to-the-road feel, will be obvious on the street and the track."

Here's how the two cars compare on paper:

But, a few things do separate the road-going C8 from the track-ready C8.R. For one, the front storage compartment in the racecar now houses a single, centrally mounted radiator. Extra-bright headlights, as well, come standard on the C8.R, an improvement over the standard 'Vette’s production units.

Unlike the outgoing C7.R, the two factory-backed C8.R's will each wear unique liveries. The number 3 car will use the classic yellow color scheme with silver accents, while the number 4 car will wear a silver scheme "inspired by the color of the iconic Corvette concepts such as the 1973 Chevrolet Aerovette and the 1959 Corvette Stingray racer."

The C8.R will hit the track for a test run this weekend at Petit Le Mans, before lining up officially at Daytona in January.