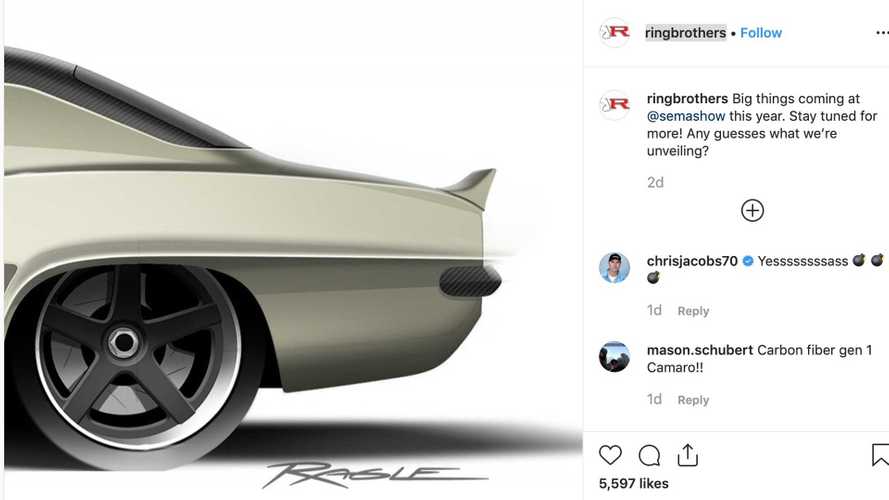 Expect a potent engine to be under the hood.

Ringbrothers makes some of the most impressive muscle car restomods around, and the company is now teasing a modified first-gen Camaro to debut at the 2019 SEMA Show. A sketch of the rear is the only available image at this time, but it offers some tantalizing details.

The flat crease that creates the top edge of the rear fender, suggests Ringbrothers' custom Camaro uses the 1969 model year version as inspiration. However, these Chevy's don't have a carbon fiber roof from the factory, so it's entirely possible that Ringbrothers could mix and match the first-gen styling cues to create a fresh interpretation of the appearance.

Other notable styling tweaks include a carbon fiber rear bumper. The car rides on center-lock, five-spoke wheels with black center sections and a polished rim. Slotted brake rotors handle the job of slowing down from high speeds.

Ringbrothers is familiar with performing radical transformations on the 1969 Camaro. At the 2016 SEMA Show, the company debuted the G-Code (gallery above). The person who commissioned it wanted a mostly stock appearance but with a few tweaks. For example, there were hidden headlights like on cars with the RS package, but the covers didn't move in this case. Power came from a supercharged 6.8-liter V8 making an estimated 1,000 horsepower (746 kilowatts) and 800 pound-feet (1,085 Newton-meters) of torque. The interior was very luxurious with lots of leather in a warm shade of brown.

At SEMA in 2018, Ringbrothers kept things fresh by modifying a 1971 Chevrolet K5 Blazer, instead of working on a classic muscle car. While it looked generally stock, the company actually fabricated the truck’s running boards, firewall, floors, side panels, air box, engine cover, and fan shroud. The V8 made 430 hp (321 kW), and it ran through a four-speed automatic transmission.