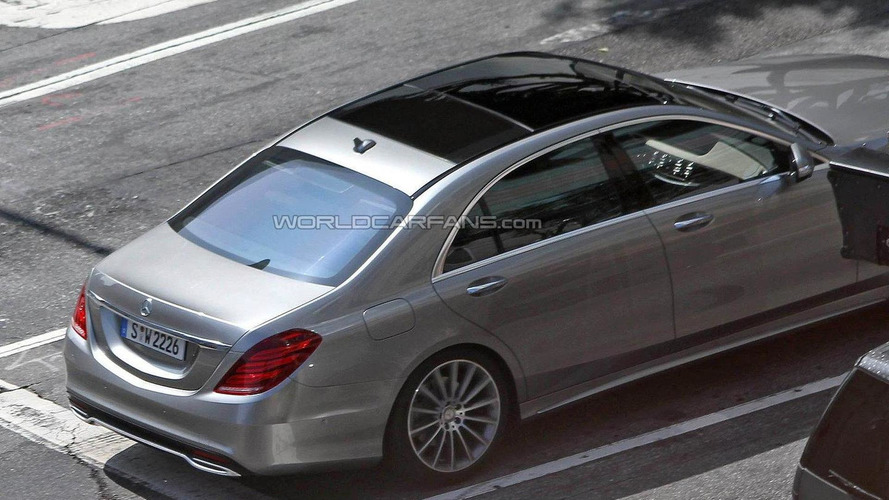 The highly anticipated 2014 Mercedes-Benz S-Class has lost all of its camouflage in these latest spy shots.

The highly anticipated 2014 Mercedes-Benz S-Class has lost all of its camouflage in these latest spy shots taken during an official photo/video shoot.

The new generation of the S-Class has been confirmed for a May 15 launch in Hamburg, Germany but we already have fully revealing photos of the car's exterior. Looking smoother than the outgoing model, Mercedes-Benz's flagship model features a generous front grille and LED headlights. The rear lights have also received the LED treatment, while the rear end is considerably sleeker.

Other noticeable styling features include sculpted doors adorned by two powerful character lines, along with a huge glass roof, slender chromed exhaust pipes and cross-drilled brake rotors. Compared to the current S-Class, the new one has more subtle fender flares which improve the overall elegant look of the car.

The regular S-Class will be offered with eleven exterior colors, including three new ones: Anthracite Blue, Ruby Black and Diamond Silver. Based on a leaked presentation, the cabin will benefit from ambient LED lightning, a wood/leather steering wheel, along with a Burmester sound system. Soft-close doors and illuminated door sill plates will also be available, plus two 12.3-inch screens for the instrument cluster and COMAND infotainment system.

Optional features will include a surround view camera, heated and ventilated seats, rear seat entertainment system, six different colors for the Nappa leather and designo leather seats and an Air Balance Package which filters and ionizes the air and dispenses perfume.

As far as technology is concerned, the 2014 Mercedes-Benz S-Class will have active seat belts which are power-deployable. These will work together with the PRE-SAFE system for automatic tension before an imminent collision. Magic Body Control is considered a next-gen Active Body Control suspension which will use a camera for detecting road imperfections and if spotted, the suspension will be automatically configured to compensate as best as possible.

Mercedes-Benz plans on launching the S550 4MATIC in October and the S63 AMG 4MATIC a month later. These spy photos depict the standard S-Class which will be followed by two longer wheelbase versions, a coupe and a convertible. The variant with the longest wheelbase will be a replacement for the Maybach 57 and will probably receive the Pullman moniker.