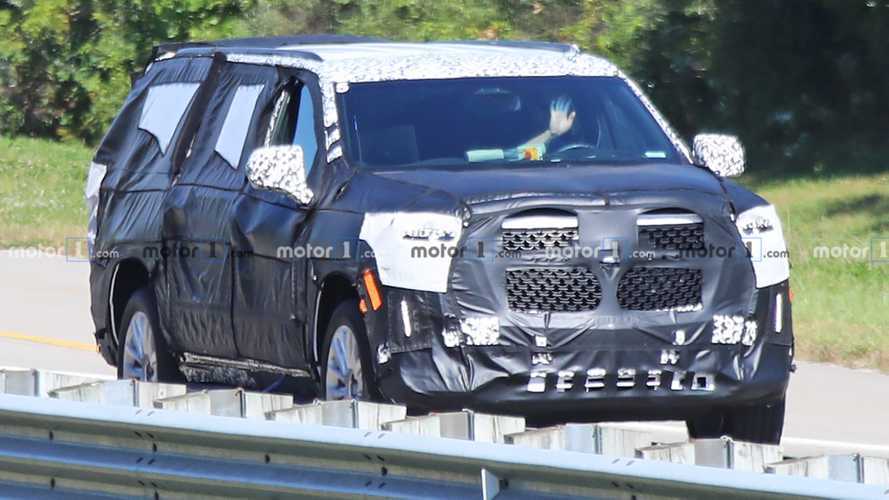 It resembles the grille introduced on the Cadillac XT4 and CT5.

We’ve been spotting camouflaged-cladded Cadillac Escalade SUVs for months. It had always worn the same drab cladding that hid the design. However, new spy photos finally reveal a bit more of the large road boat – the grille. Previous test mules have had the grille completely covered, but in our fresh round of spy photos, the grille is exposed, and it looks massive.

The Escalade is already a large vehicle, and it appears the grille takes up a majority of the SUV’s front end. You can see the black covering stretched against the bodywork. It seems as if the grille extends toward the headlights by several inches, but it’s still covered. The grille design mimics the designs introduced on the Cadillac XT4 and Cadillac CT5. The larger grille should give the Cadillac the necessary road presence to compete in the crowded segment.

Powertrains will likely receive an overhaul to go with the complete redesign. While the 6.2-liter V8 currently offered will allegedly remain the entry-level engine, there are rumors of a hybrid model returning. There are also rumors of Cadillac’s twin-turbocharged 4.2-liter Blackwing V8 being available for the range-topping trim.

Technology is expected to be a big part of the next-gen Escalade. Cadillac’s Super Cruise hands-free cruise control system, a partially self-driving system that controls the vehicle while the driver monitors the road, will be an option. There were also photos of the Cadillac receiving a massive infotainment screen, but it’s unclear if the photos were of a GMC Yukon or Cadillac Escalade interior.

The Cadillac Escalade needs a design refresh inside and out. Lincoln has seen considerable success re-establishing itself as a luxury brand while other luxury automakers revamp, refresh, and reveal large, three-row SUVs as consumers flock to the segment. The 2021 Cadillac Escalade will get a reveal sometime next year.