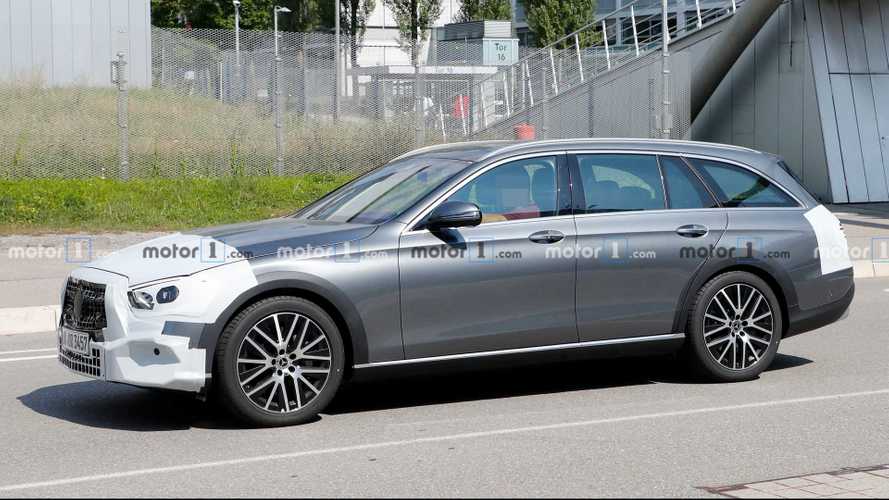 Expect new lights at the front and rear, along with revised bumpers and grille.

While a C-Class All-Terrain may or may not be on the agenda, we are 100% percent a mid-cycle refresh for the bigger E-Class All-Terrain is on the “to do” list. Mercedes is working on a mild update for its entire E range, and that means the Audi A6 Allroad and Volvo V90 Cross Country competitor will also be getting a nip and tuck in the near future. The first batch of spy shots emerged nearly a year ago, and now our spies have sent us a fresh set of images with a thinly covered prototype.

The test vehicle has camouflage exactly where you’d expect it to be – at the front and rear. Despite the foil covering a good chunk of the headlights, you can easily see the clusters have a fresh design with new LED daytime running lights mirroring those of the CLS. It appears Mercedes’ designers also spent some time tweaking the grille, but the disguise gets in the way of seeing what has changed. Some discreet modifications of the bumper complete the changes at the front.

Moving at the back, the E-Class All-Terrain will likely feature revised taillights judging by the white wrap slapped onto the tailgate, quarter panels, and the rear bumper. The metallic bar that stretches from one upper corner of the taillight to the other appears to be still there, while the bumper seems to be virtually identical to what you’ll find on the current model. That said, Mercedes will likely change a few things on the production model.

Although we don’t have images of the interior, an educated guess would be that all E-Class facelift versions will switch to the MBUX infotainment system similar to the one installed the 2020 GLE / GLE Coupe. A touchpad controller and updates to the trim and upholstery options are also planned for the lifted wagon to round off the package.

The AMGs Are Getting An Update As Well:

A forbidden fruit in the United States, the All-Terrain is currently offered in domestic market Germany exclusively with diesel engines and we are inclined to believe that won’t change with the facelifted version. The base version is the four-cylinder E220d with 194 horsepower followed by the six-cylinder E400d with 340 hp, with both hooked up to a nine-speed automatic transmission and the 4Matic all-wheel-drive system as standard.

The All-Terrain certainly won’t be the first E-Class facelift model to be revealed as logic tells us the sedan and regular wagon will be out first.

Changes Are Being Made Across The Entire Lineup: