2021 BMW M3 Spied Showing Some Grille At The Nürburgring 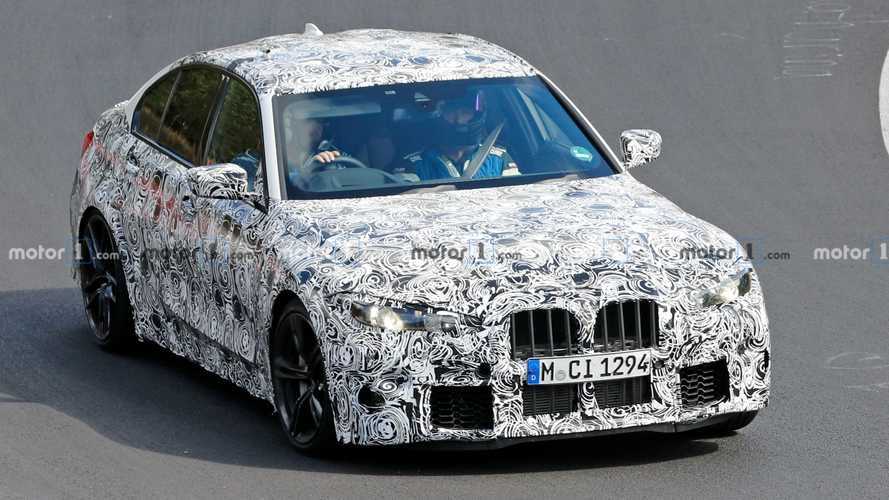 It's not like BMW can hide it, but we still don't know just how big it will be.

BMW’s forthcoming M3 still wears a fair amount of camouflage in this latest batch of spy photos, shot at the Nürburgring. That’s especially true in front, where the big question right now is whether the hot sports sedan will have a face similar to the standard-issue 3 Series, or if it will go full-on crazy with a massive kidney grille akin to the Concept 4. Yes, our inside investigators wielding spy cameras tell us this could actually be a thing.

The New M3 Is Coming:

Looking closely at the front, the grille area does appear rather bulky around the visible opening under the camo wrap. It’s an effective means of hiding detail beneath, and looking further down we can’t help but notice the vertical bars below the license plate match up to the bars in the upper grille. It could be a tricky camo thing, or it could suggest there’s one big grille behind that license plate. Frankly, we’re really hoping it’s just a camo thing, and judging by the tremendous negative feedback over the Concept 4’s beaver-toothed face, we suspect nearly all you faithful Motor1.com readers feel the same way.

Regardless of the grille size, there is something we can all agree is awesome. That would be the 3.0-liter twin-turbo six positioned behind that grille, and the latest word is that it could belt out more than 510 horsepower (380 kilowatts) in Competition trim. That actually came from BMW M boss Markus Flasch during the recent Frankfurt Motor Show, where he flat-out said the mill was capable of 510 hp, but that it hadn’t yet reached its full potential.

Will the prospect of that much power in a new M3 – and the promise of a manual-transmission option in other M3 variants – be enough to entice buyers should the massive kidney grille become reality? At this time we don’t expect to see the M3 fully revealed until well into next year as a 2021 model, so there’s still time for BMW to make some minor changes if designers deem it necessary.