The filing says a single person could attach or remove the roof panel.

The removable roof makes the Jeep Gladiator unique among American pickups because of its open-air driving ability, but a new patent from Ford indicates the Blue Oval might be contemplating a drop-top truck, too. The filing also covers a self-aligning mounting system for making it easier to install the top.

Ford wants its removable panel to be easy to install and to remove. A series of latches would attach the roof to the windshield header and body structure. Putting the piece in place would only require downward force to latch into place, and this process would also create a rearward force to fasten against the body.

The patent states that the advantage of this self-aligning mounting system is that the roof panel could come off or on the vehicle by "physically operating only the latching assemblies." The filing claims that the design would allow just one person to remove the piece. 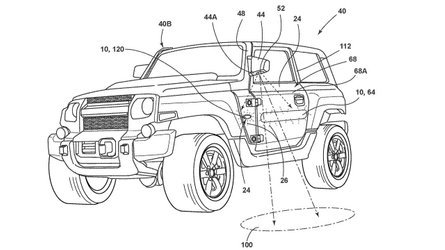 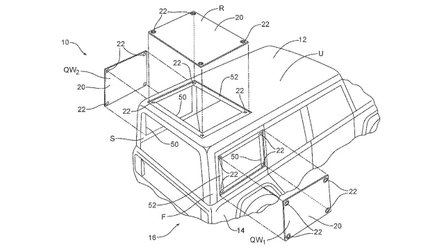 Ford's patent includes descriptions for multiple versions of this roof. It could include a fixed rear window or a sliding version. In addition, the roof portion could be clear, and this panel could be separately removable.

Because this filing applies as much to the fastening method as the actual panel, Ford says that it could also work on "cars, vans, sport utility vehicles, or any other type of vehicle that includes a removable roof assembly."

There are also many patents with Bronco-looking vehicles suggest that Ford is toying with multiple ideas of how to equip the rugged SUV with a removable roof and doors. The ideas include a retractable cloth top and mounting the mirrors on the A-pillars so there's no loss in visibility when the doors are gone.