Watch The 2020 Chevy Corvette C8 Do A Decent Donut 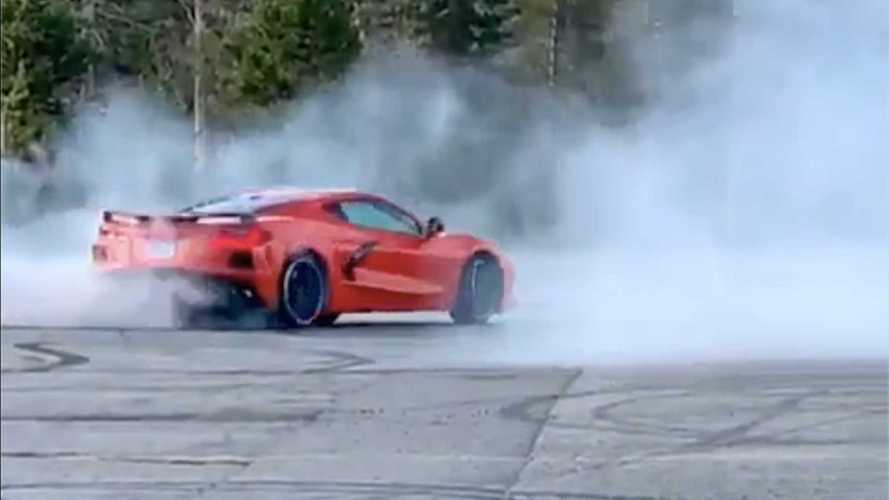 Well, someone had to do it.

The Chevrolet Corvette C8 is definitely an exciting car. With a 6.2-liter V8 LT2 engine behind the seats, producing 490 horsepower (360 kiloWatts) and 465 pound-feet (630 Newton-meters) of torque, it's a potent machine. And Chevy claims so, too, with a top speed of 194 miles per hour (312 kilometers per hour) and a 0-60 time of under three seconds.

But there's another thing that makes the Corvette an exciting and fun car: massive power sent to the rear wheels. With that, doing donuts is inevitable and it's just a matter of time before we see someone does so – and that's today.

Zach Bowman, Road & Track's senior editor, posted a short Instagram video of a mid-engined Corvette doing a donut on the pavement. It looks decent, to say the least, with a little bit of smoked rubber added to the recipe. The post came with the caption: "In the words of Saint Aldo, I've been yelled at before. Can't say anything about how the #C8 drives until October, but I can say that it will do it for Dale."

With that, it looks like the folks over at Road & Track have already got their hands on the Corvette C8, and it would come out on October. It also tells us another thing – the mid-engined Corvette would probably enter Road & Track's Performance Car of the Year.

Things You Might Have Missed About The Mid-Engined Corvette:

Could The C8 Corvette Have A Fourth Seat Option We Haven't Seen Yet?

Why is that so? Checking Bowman's Instagram account further, you could see that other performance cars are being tested together with the Corvette C8. In one of his posts, a yellow Porsche 911 and a green Lotus Exige were seen together in one photo, along with the mid-engined Corvette.

If that's the case, we might see the Corvette proving that it really is the bang-for-the-buck performance vehicle that everyone's lauding about, even before its production starts next year.