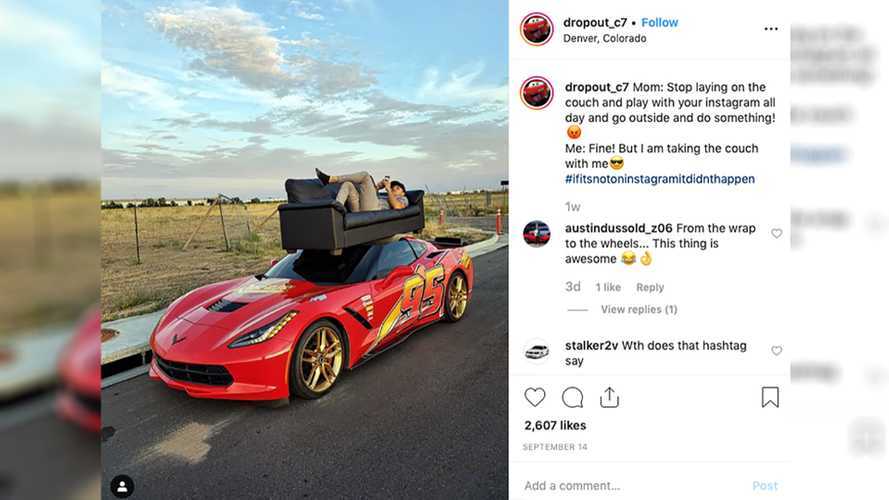 See, the Corvette is a practical vehicle.

Pixar’s Lightning McQueen from the animated Cars movie franchise is about as ambiguous as you can get with a cartoon car. It’s an amalgamation of several models, borrowing from the iconic Ford GT40 and Lola prototype vehicle, to name just a few. There’s also some Chevy Corvette in the design as Chevrolet was initially involved with the Cars movie. While the partnership never panned out, giving us the McQueen we know today, that hasn’t stopped one Corvette owner from giving his Chevrolet the Lightning McQueen treatment. Instagram user dropout_c7 wrapped his Corvette in the same iconic Lightning McQueen livery, and it looks good.

Everything you’d expect to see on McQueen is on the Corvette, including the Rust-eze logo on the hood and rear fenders. A big, bold lightning bolt underneath McQueen’s iconic 95 gives the Corvette the proper race car appearance even if the flames are missing. The gold rims, different from the red ones on the cartoon car, complete the look. The Corvette isn't an exact match, but it’s done well enough to overlook those minor differences.

But the wrap is only one part of what makes the Lightning McQueen-wrapped Corvette unique. The Instagram page is filled with photos and videos of the Corvette doing some not-so-Corvette things. There are several instances of the Corvette with a couch on the roof. Why not? Then there’s an odd fascination with watermelons – whether it's using one as a shifter, stuffing them into the trunk, or shooting them off the roof, which seems like more mess than fun. Watermelons are everywhere.

The definition of fun is different for everyone, and while hauling sofas and watermelons may not be everyone’s cup of motor oil, it’s clear dropout_c7 is having a blast creating some cool and unique vehicular content. As long as safety is a top priority, let the Corvette haul all the sofas and watermelons it wants.