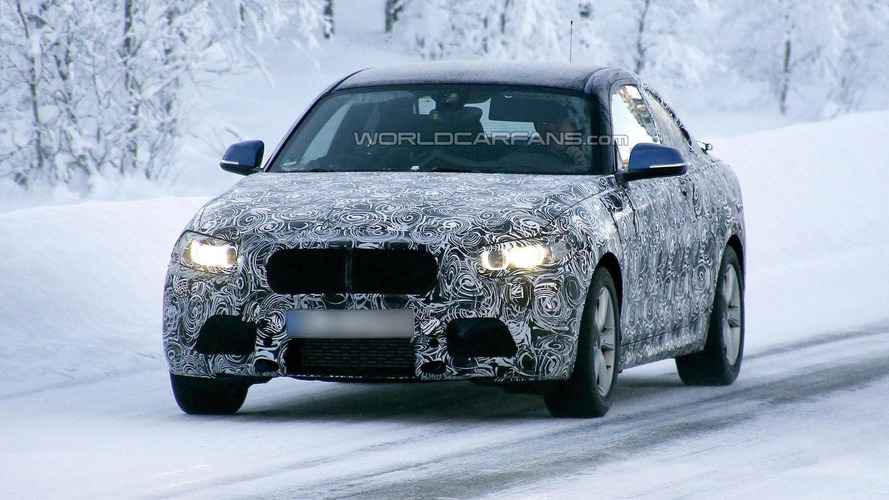 The 2014 BMW 2-Series Coupe has been spied once again by our photographers, ahead of a possible launch later this year.

The 2014 BMW 2-Series Coupe has been spied once again by our photographers, ahead of a possible launch later this year.

The current 1-Series Coupe will soon be discontinued as BMW plans on introducing the 2-Series which will feature the coupe, convertible and possible GranCoupe versions of the 1-Series. The 2-Series will of course be based on the 1-Series hatchback and according to BMW will be sportier than the outgoing 1-Series Coupe.

It will have the same 4-cylinder engines including a 2.0-liter gasoline which will be available with 150 hp (112 kW), 177 hp (132 kW) and 218 hp (163 kW). The 2.0-liter turbodiesel is expected to offer 214 hp (160 kW). Gearbox choices will include a six-speed manual as standard and an optional eight-speed automatic. xDrive will also be available at an additional cost.

Last month a report indicated the range-topping M235i Coupe will enter production phase in November at BMW's Leipzig factory. It should have an inline-six 3.0-liter outputting 315 hp (235 kW) and 450 Nm (332 lb-ft) of torque. The same source reported the engine will be mated to an eight-speed auto. It is likely to borrow the dual exhaust configuration of the M135i and feature M Performance brake calipers painted in blue. 18-inch alloy wheels with 255/40 R18 front and 245/35 R18 rear tires are apparently on the list.