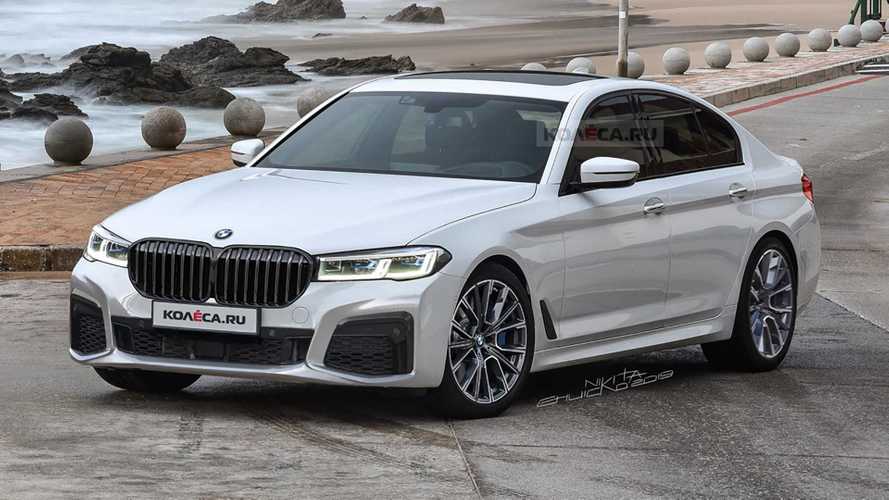 It looks similar to what we’ve seen in spy photos.

The BMW 5 Series sedan and wagon are due for a mid-cycle refresh – and that’s been no secret. Camouflaged prototypes with the front and rear fascias covered have been spied all summer. We don’t know what the new design will look like; however, we know it won’t be a significant redesign. That’s still a few years away. Instead, BMW is likely giving the 5 Series new front and rear fascia designs, which will remain a mystery until BMW reveals the vehicle. However, our colleagues over at Kolesa.ru decided to render the updated 5 Series ahead of its official debut.

The pair of renderings – front and rear three-quarters – show many of the suspected design changes coming to the 5 Series. The 5 Series rendering has a larger kidney bean grille, something BMW has been doing with new and refreshed models. The headlights also receive a new look, too. The 5 Series rendering also sports a redesigned lower front fascia and lower intakes, all of which fall in line with the speculated changes.

The rear is much more subdued in the rendering. The taillights appear bigger than on the outgoing model. It’s difficult to determine from the spy photos how large the lighting elements could grow. Just like the front, the rear’s lower fascia gets some love with a new design and diffuser, which is expected on the new refreshed 5 Series.

We’ll have to wait to see how accurate this rendering is compared to the real-world car. BMW’s reveal of the refreshed 5 Series is likely over a year away. We may not see the new 5 Series until mid- to late-2020, and it should borrow cues from other recent BMW offerings such as the 2020 BMW X6 and 2020 BMW M8. Powertrain information remains under tight security – as automakers tend to do with future models – so we still have a lot to learn about the refreshed offering. The rendering gives us a small hint at what to expect.