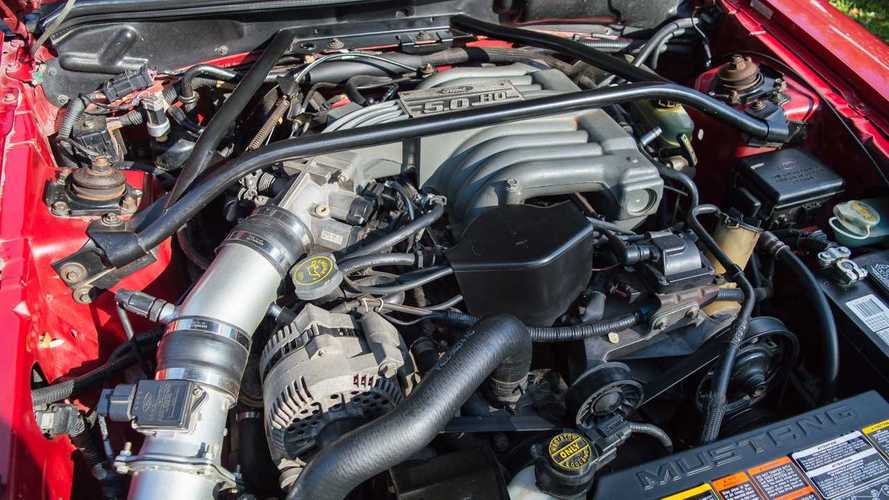 Aside from first-drive reviews and a few other special circumstances, the Motor1.com team posts articles in the collective we voice because we’re one big, happy family. This time, I’m going to make it a bit more personal, because Hot Rod magazine recently had the pleasure of dyno testing the very last 5.0-liter pushrod V8 built for a Ford Mustang. The year was 1995, and guess who happens to own a Laser Red 1995 Ford Mustang GT five-speed convertible?

I’ve owned this car for three years now and for the record, it’s not fast. That’s because the venerable old 5.0 V8 was only rated at 215 horsepower (160 kilowatts) for 1994 and 1995, down from 225 in the 1993 Mustang thanks to a bend in the upper intake that restricted airflow just a bit. But when I took my new-to-me 1995 GT Convertible to a local chassis dyno for some baseline testing, I got nearly 200 hp at the wheels. That equates to roughly 240 hp at the crankshaft, which delighted me to no end. Aside from a cheap cold air kit and a bump to the ignition timing, the car was stock and showing 100,000 miles on the odometer.

I say this because Hot Rod had a similar experience. Per the article (which includes photos of the actual last 5.0 and additional details), the engine was verified by Ford as the last pushrod 5.0L HO V8 destined for a Mustang. It was also signed by a plethora of Ford employees who assembled the engine, with one of those signatures featuring a date of August 9, 1995. It was given some fresh oil and hooked to an engine dyno, with its stock exhaust manifolds and original equipment still in place. The result? No less than 251.9 horsepower at 4,800 RPM, and a 320.5 pound-feet of torque at 3,500 revs. Those numbers are considerably higher than what Ford said the old 302 V8 should produce.

I’m tempted to call some shenanigans here, because the engine wasn’t connected to the SN95’s notoriously restrictive, catted mid-pipe. Also, a Holley EFI management system was used to fire the engine in place of the Mustang's old EEC computer brain. The missing exhaust definitely helps in the power department, and it’s possible the Holley system was altering some other engine parameters. However, my own personal experience suggests that maybe, just maybe, Ford underrated these 5.0-liter GTs.

Why does any of this matter? The small-block Ford pushrod V8 was the Mustang’s heart and soul for 30 years. It’s the reason I specifically sought out a 1995 Mustang GT, as it truly marked the end of an era. More importantly for the Mustang’s future, the SN95 and New Edge models were cash cows for Ford, with the automaker handily outselling the Chevrolet Camaro and Pontiac Firebird combined through the 1990s. Had these Mustangs not been a success, it’s entirely possible Ford could’ve dropped the nameplate in the early 2000s, as GM did with the Camaro and Firebird in 2003.

Much Has Changed In 25 Years:

As for my 1995 GT, it’s a slow work-in-progress that now has a properly loud exhaust system, 3.73 gears, and a few other minor upgrades. There will be no Coyote swap in my future, however. After reading this feature, I suspect you’ll understand why.