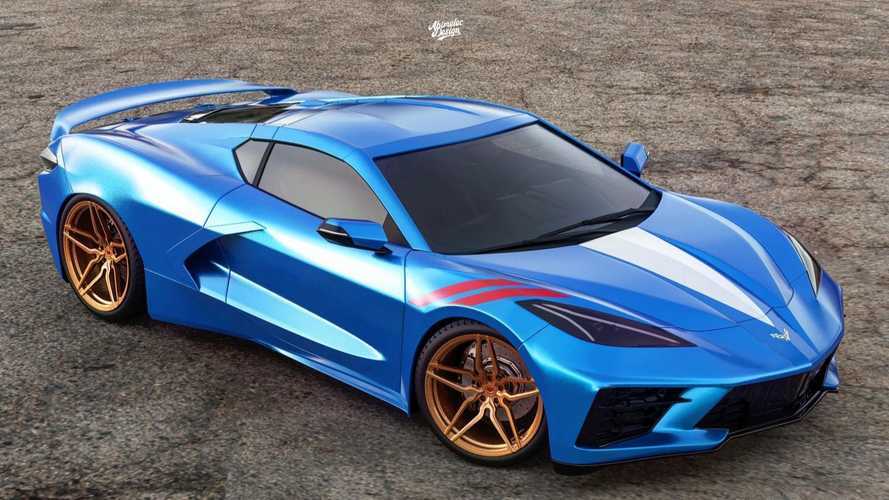 A Grand Sport is all but guaranteed, and we hope it looks like this.

We’re just a couple weeks away from officially seeing the new 2020 Chevrolet Corvette Convertible, but ‘Vette fans around the world are still looking further into the supercar’s future. Abimelec Design on Facebook dropped this delectable pair of renderings a few days back, depicting what could be a future Corvette variant. Fans of America’s sports car will instantly recognize it as the Corvette Grand Sport.

Viewed head-on, the changes are rather simple. It wears the iconic dual red stripes on the fenders with a white stripe on the hood, and a set of gold wheels further separate it from the C8 pack. The rear is where most of the magic happens, with a redesigned lower fascia that ditches the squared-off exhaust tips at the corners for a bank of quad ovals smack in the middle. That’s the aggressive look we’ve come to appreciate on the C7 Corvette, and since the Grand Sport traditionally incorporates aero tweaks from the Z06, there’s a larger spoiler and tweaked bodywork behind the rear windows. Of course, we know nothing about a new C8 Z06 yet so it’s all just make-believe, but it’s not a bad look by any stretch.

When will we know more about future C8 models? If we follow the C7 Corvette’s timeline, the Z06 would be the next version to launch, coming in a couple of years with a Grand Sport following a few months later. However, Chevrolet is basically writing an all-new Corvette chapter with the mid-engined model, so it’s tough to say exactly what will come next. That’s especially true since the C8 will eventually carry a completely different DOHC engine, not to mention an eventual hybrid version that could deliver upwards of 1,000 horsepower.

In the meantime, we’ll be attending Chevrolet’s C8 Convertible reveal on October 2 in Florida. From there, the sky’s the limit.