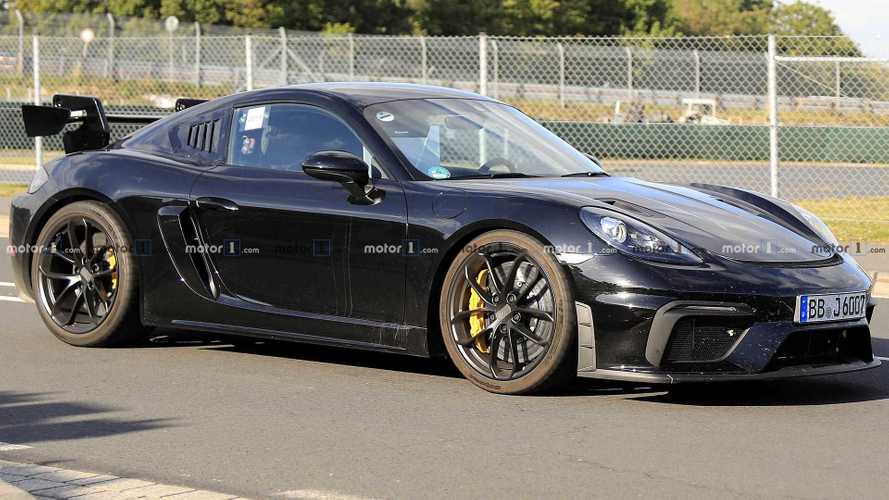 Spy shots once again catch the development of the even hotter version of the Porsche 718 Cayman GT4, which we suspect wears the RS suffix. There are major changes to the body in comparison to the already performance-focused model.

This development car looks the same as the one in earlier spy shots, but there are still some great angles for looking at the coupe in these images. There's a new hood with two ducts in it and a more creased appearance than the one on the existing GT4. The inlets on each side of the body are larger, and there are now vents in the rear quarter windows. The back gains a bigger wing with goose-neck mounting. The front and rear fascia appear to be the same as the current GT4.

Zooming into the pictures provides a glimpse of the interior. The seats look like the same thick-bolstered chairs from the GT4, and there's Alcantara around the rim of the steering wheel. Like the car in other spy shots, there's a massive laptop occupying the passenger space.

The big screen makes us think that it's important for the driver to be able to see the display easily. It's possible that some of the new vents might be routing more air to a tuned version of the GT4's engine, and the engineer needs to be able to keep an eye on this data. The existing model uses a naturally aspirated 4.0-liter flat-six engine making 414 horsepower (309 kilowatts). Porsche intends to decrease friction within the powerplant and increase its ability to rev in order to boost the mill's output.

The debut date for the GT4 RS is a mystery. However, a rumor indicates it arrives in mid-2021. If this is the case, expect to see a whole lot spy shots of the model's development.