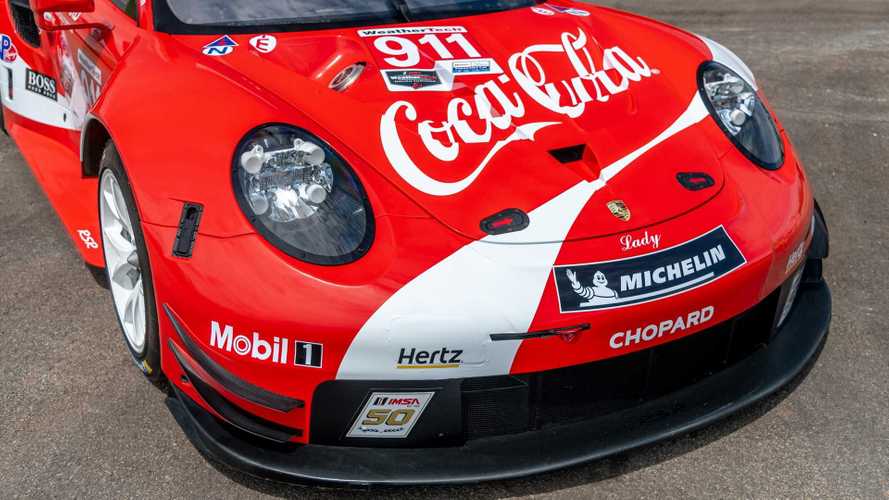 In this 50th anniversary season of the International Motor Sports Association (IMSA), several special liveries were seen in the season-opening Rolex 24 Hours at Daytona and the 12 Hours of Sebring.

Now Porsche has elected that for the 10-hour season-closer, in which the 911 RSRs are dueling for the GT Le Mans championship, its cars should carry the “Coca-Cola” and “Coke Is It!” slogans made famous by the Bob Akin Motor Racing team’s Porsche 935s and 962s in the 1980s.

The difference between the two 911s will see the #911 car of Nick Tandy/Patrick Pilet and third driver Frederic Makowiecki running a white windshield banner, while the #912 of Earl Bamber/Laurens Vanthoor and third man Mathieu Jaminet will use a black banner. Both cars’ BBS wheels will be painted white.

The RSR Is A Beast:

The press release describes the partnership as a natural fit with the venue, given that Porsche Cars North America is headquartered in Atlanta, while Coca-Cola's “entire corporate history” has been spent in the Georgia capital.

Pedro Mota, VP of marketing for PCNA said: "Last fall, we kicked off the IMSA 50th Anniversary celebration with the fan-favorite Mobil 1 livery at Petit Le Mans. We began the 2019 season by highlighting still another longstanding and successful relationship with the famous red, white and blue 'sweeps' of Brumos Racing and Hurley Haywood.

“Now, as one last tribute to honor IMSA on their Golden Anniversary, we are bringing back yet another memorable livery… a local favorite: Coca-Cola. As an added benefit, we get to fondly recall Bob Akin, the gentleman who first brought Coca-Cola and Porsche together with the customer 935 and 962 race cars he successfully campaigned."

Jim France, IMSA and NASCAR chairman added: "I can't think of a better way for fans to celebrate the final race of IMSA's 50th Anniversary season by seeing two of the most iconic brands in the world – Porsche and Coca-Cola – bring back an unforgettable livery.

“Bob Akin was one of a kind, much like Porsche and Coca-Cola, and to see this livery at Michelin Raceway Road Atlanta for this year's Motul Petit Le Mans will certainly be exciting for everyone."

Petit Le Mans will mark the swansong outing for the current-gen 911 RSR before it is replaced by the new RSR-19, which has already debuted in the FIA World Endurance Championship, next season.