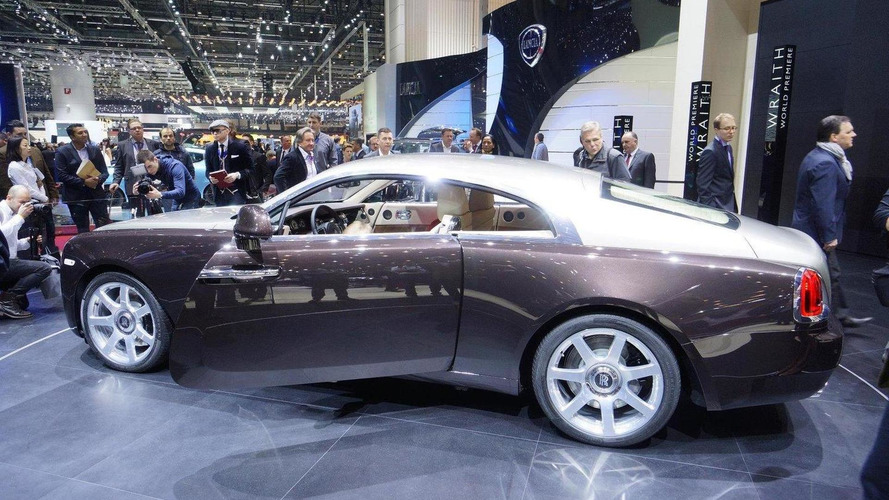 The first pictures of the Rolls-Royce Wraith have arrived, ahead of tomorrow's unveiling at the Geneva Motor Show.

The first pictures of the Rolls-Royce Wraith have arrived, ahead of tomorrow's unveiling at the Geneva Motor Show.

Essentially a Ghost Coupe, the Wraith has a familiar front fascia which flows into a fastback roof that gently tapers to the rear end. Overall, it measures 130mm shorter, 40mm wider and 43mm lower than the Ghost and rides on a wheelbase that has been reduced by 183mm.

The interior is instantly recognizable but adopts a four-seat cabin with wraparound wood trim. We can also see premium leather upholstery, metallic accents and a star-light headliner.

Power is provided by a V12 engine that develops 624 bhp (465 kW) and 590 lb-ft (799 Nm) of torque. It is connected to an eight-speed automatic transmission which is rumored to use GPS data to determine if it's in the right gear for the given road. This should enable the luxury coupe to accelerate from 0-60 mph in 4.4 seconds.

To improve the car's handling, engineers stiffened the suspension and added a revised steering system which varies its resistance depending on the speed of the vehicle. While owners won't confuse it for a Lotus Elise, the Wraith looked relatively composed when it was tested on the Nürburgring.

The Rolls-Royce Wraith is expected to go on sale this fall and UK pricing should start at roughly £215,000.