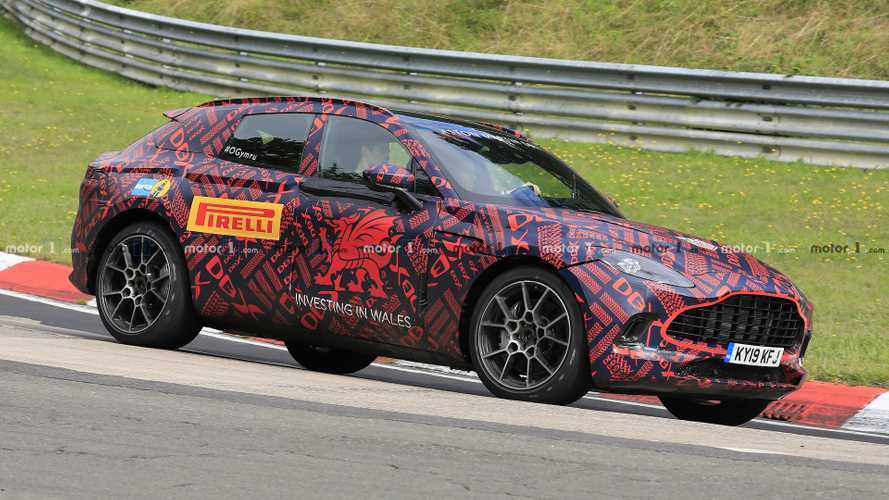 Looking quite stable in the corners.

A week ago, a rendering from Kolesa.ru previewed what to expect from Aston Martin’s first-ever production SUV. Now, the high-riding machine is back in another set of spy photos, which basically cements the perception that the DBX is almost ready for its global premiere.

This time around, the fast SUV is turning laps at the Nurburgring – this is not the first time we are seeing it cornering at high speeds and it’s good to know the British automaker is making special efforts to guarantee the DBX will be a capable performance vehicle. The body roll on these photos appears to be minimal, which is impressive for such a large and heavy crossover.

The Bentley Bentayga rival is once again showing its larger-than-life brakes, which are probably bigger in diameter than the tires of the average compact car. For better traction, Aston Martin also puts a set of massive 325/35/R22 Pirelli P Zero tires. Just like on the previous test prototypes, this test car features a roof-mounted spoiler with a central fin, along with a rather large built-in spoiler on the tailgate.

The exact identity of the engine that’s under the hood of this trial car is not known at the moment. However, we can confirm it has a twin-turbo layout – it’s either a Mercedes-sourced V8 or Aston Martin’s own 5.2-liter V12. The former should be the first to be launched, followed by the range-topping V12 later during the model’s lifecycle.

Last but not least, the DBX could become the first SUV on the market with a drift mode. While that’s not confirmed yet, Aston Martin’s Senior Manager of Vehicle Dynamics Ian Hartley admitted in a recent interview he is “all for drift mode.” How’s that going to work on a high-riding vehicle, we don’t know but we are eager to see the Aston Martin of SUVs in action soon.