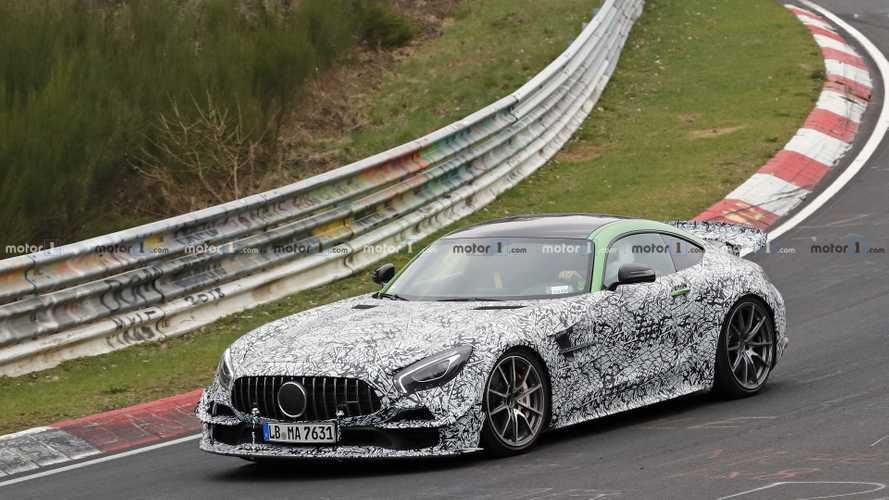 The meanest AMG is almost here.

The AMG GT  is offered in numerous trims with ever-increasing performance. Today the range-topping AMG GT R is the fastest production version sporting a 577 horsepower twin-turbo V8 and clever active chassis systems. Although the AMG GT R already has world-beating performance capabilities, the team at AMG is hard at work on the even more capable AMG GT Black Series.

We’ve seen the Black Series testing at the Nurburgring and received countless spy shots of the mean-looking coupe. However, once you see the AMG GT Black Series test mule up close you finally get a perspective of the insanity of the final product.

Look past the clever camo and you see the enlarged air intakes, the massive fenders, and comically large hood vents. Then there’s the rear wing, which puts an F1 car to shame and extend rear diffuser that hugs the ground.

Based on a glance you can tell a huge effort went into the aerodynamics of the Black Series. Sure there will be more horsepower and other go-fast bits, but the clear changes to the exterior show a well thought out track beast.

We expect the AMG GT Black Series to use a pumped-up version of the current twin-turbo V8 in the lesser AMG GT models. Tuners have already had the AMG GT R tuned to over 880 horsepower with a simple exhaust system and new turbos. AMG will probably be a little more conservative with final power output but expect something north of 700 horsepower.