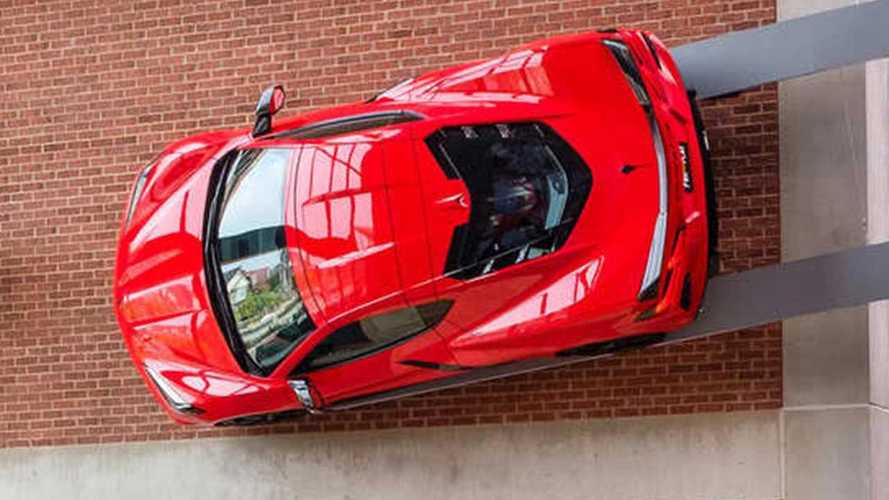 There's an extra Easter egg on the license plate.

To many folks, the 2020 Chevrolet Corvette is already a piece of art, but a new display at the Chevrolet entrance of the Little Caesars Arena now makes that point undeniable. The C8 'Vette has a place of honor as part of a sculpture on the wall over the door of the building.

The sculpture's design shows a Detroit Redwings emblem at its base. A pair of prongs curve outward and connect to the Corvette's wheels. Since the arena is home to an ice hockey team, among many other events, there's a special Easter egg on the car for eagle-eyed fans. The license plate displays PWR PLAY with the Chevy Bowtie emblem between the words.

This is a real C8 Corvette on the wall, not merely a model. It was originally a pre-production car, according to Autoblog. Chevy repainted the coupe Torch Red for this special display.

This is one of the more eye-catching ways for Chevy to build buzz for the C8 Corvette before the model begins arriving in showrooms. The much-anticipated isn't too far away from being in showrooms, and the Bowtie is already dropping lots of details about it. Prices start at $59,995 after destination, and that gets buyers a 490-horsepower (365-kilowatt) coupe. Paying an additional $5,000 gets the Z51 Performance Package that includes a revised body kit, tweaked suspension, electronic limited-slip differential, better powertrain cooling, larger brakes, and a performance exhaust the pushes the engine output to 495 hp (369 kW).

Listen To The Mid-Engine 2020 Corvette Start, Rev, And Launch

Chevy also confirms that the C8 Corvette Convertible debuts on October 2. It should be mechanically identical to the coupe but with a power-folding hardtop. A revised rear deck no longer provides a view of the engine.