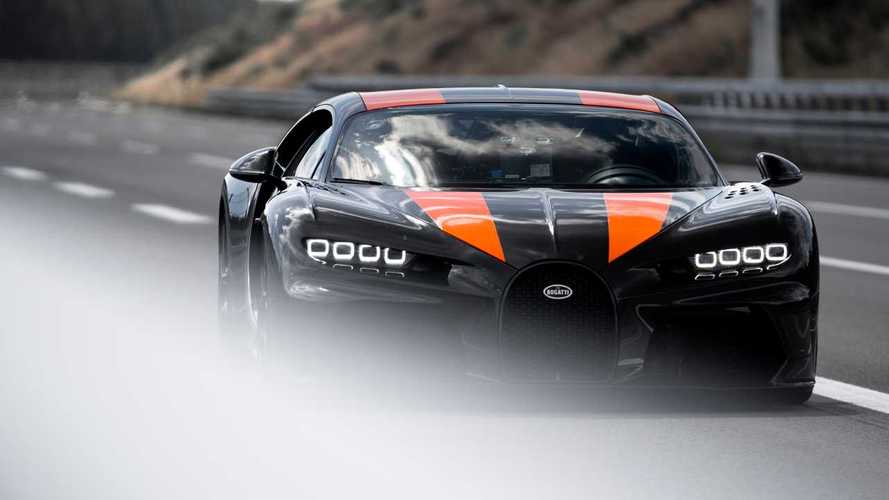 The best reaction is to just keep the pedal to the floor.

Taking the Bugatti Chiron Super Sport to over 300 miles per hour (483 kilometers per hour) isn't for the faint of heart. Driver Andy Wallace even had a white-knuckle moment at 278 mph (447 kph) when the hypercar briefly went airborne at the Ehra-Lessien test track. He told Australia's Which Car about the scary experience.

"There is a surface change [on the straight], and I was calling it a ramp and jump, and everyone was wondering why I was calling it that," Wallace told Which Car. "That was until they looked at the data, and they realized that it actually is a jump. This occurs at 447km/h on that fast run."

The surface change comes shortly after the transition from the banking corner to the straight section. To maximize the top speed on the course, Wallace had to brace for the impact but keep the throttle pinned against the floor.

The Latest From Bugatti:

"You can’t lift though. In fact, lifting makes this much worse, because then you get a pitch change at the front and it gives you a whole heap of trouble," Wallace told Which Car.

Bugatti is building a limited run of 30 Chiron Super Sports starting in 2021, but they are a bit different from Wallace's 300-mph version. The production example has a passenger seat and the suspension sits higher.  The vehicle also comes stock with a speed limiter. However, buyers can choose to remove it and add a roll cage for attempting to hit 300 mph during special events at Volkswagen Group's Ehra-Lessien test track. The price for the car and the privilege of getting to taking it to the maximum velocity is reportedly €3.5 million (around $3.9M at current exchange rates).