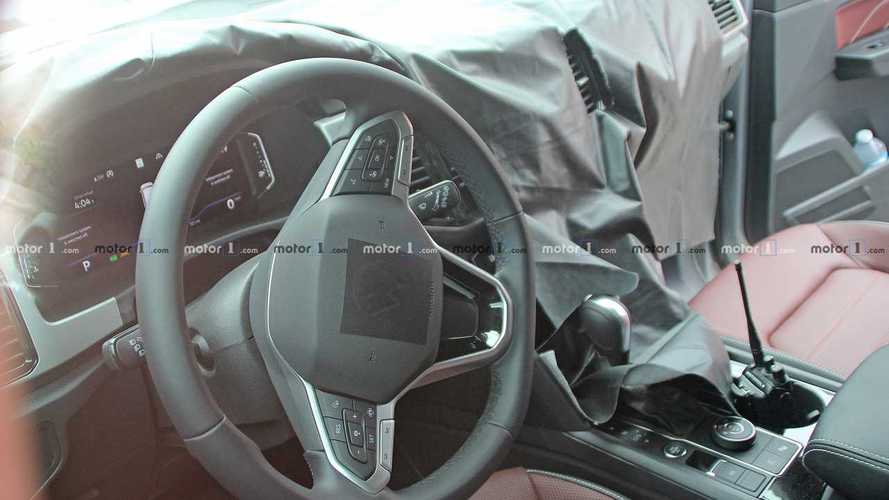 Not nearly as sleek as the concept's interior.

After stretching the compact Tiguan to create a seven-seat Allspace version, Volkswagen will be doing the exact opposite with the Atlas. The midsize crossover will forgo the third row to spawn a somewhat sportier version that’ll go by the name of Atlas Sport in a bid to ride on the wave of increasingly popular crossover “coupes.”

We’ve already driven a prototype in the Death Valley, where it just so happens our spies have now caught a test vehicle still carrying a lot of camouflage. The styling will obviously be derived from the regular Atlas, but with a gently sloped roofline and a smaller body as the overall length will decrease by 5.7 inches (14.4 centimeters). We’re hoping some of the good looks of the namesake concept from 2018 will rub off onto the production version, specifically when it comes to the interior.

However, the new spy images are showing the production Atlas Cross Sport will have a virtually identical dashboard design. The prototype we had the opportunity to drive had an updated 12.3-inch digital instrument cluster, but the same touchscreen on the center console. That also seems to be the case here, but we’ll remind you the concept had a 10.1-inch display for the infotainment system whereas the Atlas comes with a smaller 8-inch setup.

In addition, the concept came with a secondary touch panel mounted lower on the center console for the climate control settings. From what we’re able to see so far, the production-ready Atlas Cross Sport will carry over the traditional buttons and knobs used in the normal Atlas and a lot of other VWs sold not just in North America, but in Europe as well.

We already know the sleeker Atlas will borrow the very same turbo four-cylinder 2.0-liter engine from its bigger brother, complete with 235 hp and 258 pound-feet of torque. Should you need more, the naturally aspirated V6 is going to be rated at 276 hp and 266 lb-ft. We’d like to remind you that VW is toying around with the idea of a turbocharged six-cylinder Arteon R with a new engine that would also find its way inside the Atlas.

Back in 2017, Auto Express magazine learned from Dr. Elmar-Marius Licharz, head of product line for medium and fullsize cars, about the newly developed 3.0-liter VR6 engine in question. At the end of that year, product line spokesperson, Martin Hube, told Car Throttle about the existence of a prototype six-cylinder Arteon with 404 hp on tap. Hopefully, the Arteon R and the two Atlas crossovers will get it one day.

Side note, the Atlas already offers a turbocharged 2.5-liter VR6 with 295 hp, but only in some parts of the world where it’s called the Teramont. The same engine is also available in China for the SMV crossover, which represents the Volkswagen Group’s largest vehicle ever to ride on the flexible MQB platform.

Three-Row Atlas Is Getting A Nip And Tuck: