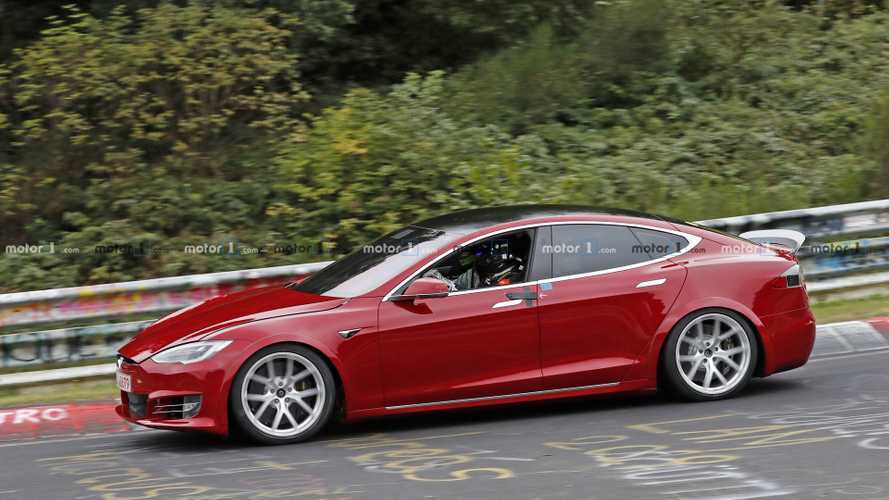 Will this turn into a race for EV supremacy?

[UPDATE, September 12] 14 new spy shots from the Nürburgring have been added at the beginning of the gallery, below.

Late last month, Porsche announced it had paid a visit to the Nürburgring with a brand-new car – the Taycan, the company’s first fully-electric vehicle. And it didn’t stop there for a leisurely cruise, either. The German automaker set a new Nürburgring record for four-door electric vehicles. Then, last week, a day after the Taycan officially debuted, Tesla CEO Elon Musk tweeted “Model S on Nürburgring next week.” Well, next week is this week, and wouldn’t you know it there’s a Tesla Model S on the Nürburgring.

New spy photos show a modified Model S at the track along with a team of people. The car features wider fender flares, aggressive (lightweight?) wheels, performance tires, and a lip spoiler. The lower front grille is also larger. Now, before grabbing the pitchforks and poster boards, there are rumors the modifications could become a special edition package. This would allow Tesla to claim the car that set the record was a production vehicle.

There are also rumors Tesla could make a record attempt as soon as next week. A 30-minute time slot mysteriously opened at the track next Saturday, September 21, and it’s unclear if it’s for Tesla. That could give Tesla enough time to attempt to set a new record. And it appears Tesla will have no trouble finding a competent driver. Nico Rosberg, the race car driver, offered his high-skilled motoring services to the California EV company.

Tesla – and Musk for that matter – has built its reputation on bold risks and huge wins. Tackling the Nürburgring will be no easy feat. It’s a complicated and treacherous course that revels in exploiting the mistakes and weaknesses of cars and drivers alike. There’s a very good chance Tesla could attempt the record in the coming days and weeks. And it could all fail. Or, Tesla could become the new record holder. For now.