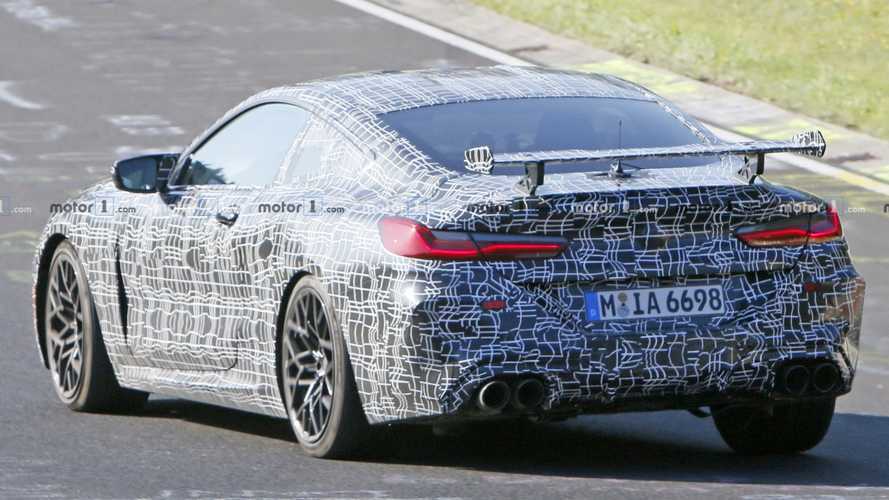 Is BMW working on an aero package for the performance coupe?

The latest member to join BMW’s M family was the new M8 in Coupe and Cabrio versions. The Bavarian manufacturer considers it a supercar and sees no point in launching a more expensive, more powerful, and faster car. After all, in Competition trim, the new M8 has 617 horsepower (460 kilowatts) from BMW’s 4.4-liter twin-turbo V8 engine. Still, performance upgrades for the range-topping M offering are probably in the works as this new batch of spy shots suggests.

Seen here is a camouflaged M8 Coupe prototype lapping the Nurburgring. And while it looks practically identical to the production version of the model, the fixed wing mounted on the boot lid is what caught our attention. But let’s take a look at the rest of the exterior first.

This test car rides on what appear to be optional wheels from the Competition package that are already available for the M8. Looking at the front, everything seems to be identical with the production M8, including the blackout treatment of the big kidney grille (well, not as big as the one seen in the Concept 4). The only visible change is the prototype’s side gills, which appear to have a different shape compared to the M8 Coupe and M8 Convertible.

The spoiler at the back, however, is vastly different from the slim spoiler that sits atop the decklid on the production M8. It’s obviously a fixed unit that doesn’t use any sort of active electronics. Why is it there then? We assume BMW is developing additional aerodynamic components that could be offered to customers as part of the M Performance catalog. The other possible option is a hardcore, track-oriented variant of the M8 that could wear the Clubsport moniker, but it’s probably still too early to see development prototypes of this series.