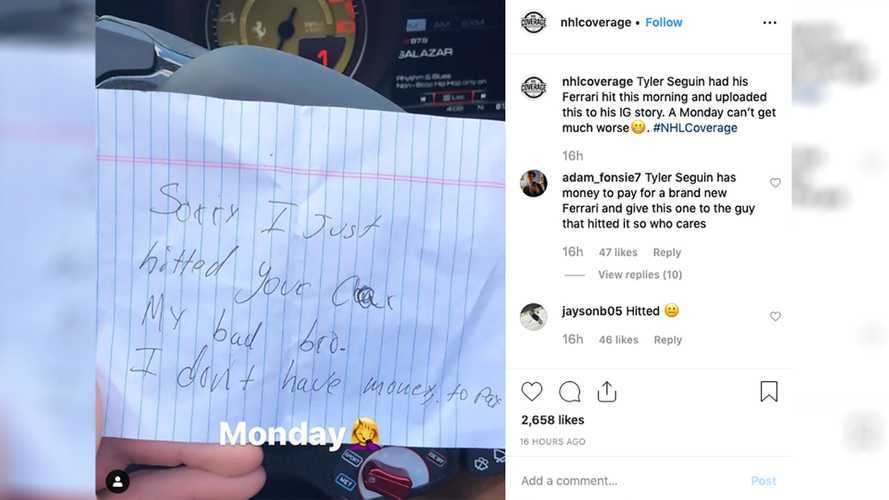 It happened on a Monday, too.

Imagine walking out to your car – maybe you’ve been at work or the store or something – and you notice a piece of paper tucked under the windshield wiper. You hope it’s a pamphlet for a roving tent revival that’s made its way to town, but the cars around you have no such promotional. As you get closer, you inspect your car for damage – at least they left a note, right? Nope, the note is an apology with zero identifying information. Well, that’s what happened to Tyler Seguin, the NHL player with the Dallas Stars.

Baker Mayfield Gets RV Upgrade For Sophomore Season With Browns

According to a news report from KTSA, Seguin posted the now-gone Instagram story of the note left on his white Ferrari 458. The Instagram page nhlcoverage re-shared the pic. Whoever wrote the note was apologetic, saying, “Sorry I just hitted [sic] your car My bad bro. I don’t have money to pay.” However, the note lacked the perpetrator’s name, phone number, or insurance information. Seguin captioned the photo “Monday” with the facepalm emoji, which we certainly understand. Who wants to start their week with a damaged supercar?

The original Instagram story is now gone – they only stick around for 24 hours before auto-deleting – so information about the extent of the damage remains unknown. Regardless of the scale, the repair bill could get costly. Ferraris aren’t cheap to own, nor fix, and any damage could cause quite the headache, especially if there’s damage to a delicate part of the car – think creased sheet metal or a bumper packed with sensors.

It’s difficult to imagine discovering your Ferrari damaged, but imagine hitting someone else’s Ferrari. It’s a no-win situation for both parties, and the perpetrator did leave a note, which is more than most people would have done. However, taking responsibility for the accident would have been the right thing to do. Hopefully, Seguin gets his car repaired and back on the road ASAP.