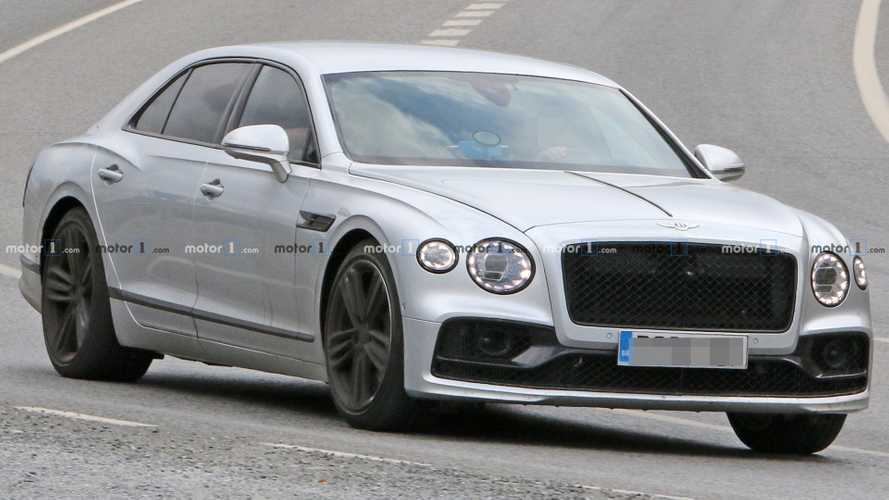 Speed and luxury in a single, very expensive package.

The new Bentley Flying Spur is a very fast luxury sedan with its top speed of 207 miles per hour (333 kilometers per hour), but new spy shots indicate the brand is working on a Flying Spur Speed version with even higher performance abilities. The speedy sedan should be able to pamper its occupants in opulence while hitting ludicrous velocities.

The Flying Spur Speed looks a whole lot like existing version but with some blacked-out details. The mesh grille, strakes in the front fascia, B-shaped fender vents, window trim, and quad exhaust pipes are now in a darker color. This one wears wheels with five sets of triple spokes and a dark gray finish.

Interior changes are a mystery but expect the Flying Spur to retain an opulent cabin. Elements like carbon fiber trim could communicate the Speed's sporty demeanor.

The Flying Spur Can Cruise In Comfort:

To get its extra performance, the Flying Spur Speed adopts a plug-in hybrid powertrain. If you look closely at the back, it's possible to see the flap covering the charging port on the driver's side rear fender. The powertrain is allegedly the biturbo 4.0-liter V8 hybrid from the Porsche Panamera Turbo S E-Hybrid. The setup makes 680 horsepower (507 kilowatts) in that application, but the Bentley could have a tweaked version.

These spy shots hint at some of the other mechanical changes, too. The ride height appears just a little lower, suggesting a stiffer setup. The brake rotors also look larger, particularly at the front.

A debut date for the Flying Spur Speed is currently a mystery. It seems like a safe bet for sales to start later in 2020 because deliveries of the standard version don't begin until early in the year.