Spy photos are showing Renault is preparing a nip and tuck for the Megane RS, but that certainly won’t involve stuffing a supercharged 6.2-liter V8 HEMI engine under the hood. The fastest front-wheel-drive car at the Nürburgring already has plenty of punch from its 1.8-liter turbo delivering 275 hp, and jumping to 707 hp would be way too much for that chassis. Nevertheless, here’s the purely hypothetical Megane Hellcat with its dual-vented hood, beefy wheel arches, and a massive front splitter.

The Fiat 500 hatchback is exiting the U.S. market together with its amped-up Abarth variant, but we’re sure some would enjoy the idea of an even hotter derivative developed by Renault Sport. Taking inspiration from the Megane RS, the mean city car gets a widebody kit and massive 19-inch wheels along with the Sirius Yellow paint scheme and chequered flag lights motif of the French hot hatch. It’s also slammed to the road with virtually no ground clearance to give it an angrier attitude enhanced by the big diffuser and roof spoiler at the back.

A widebody, high-performance midsize sedan from a mainstream brand probably has no place in the European market where the Renault Talisman continues to be eclipsed by the VW Passat. Still, that can’t stop us from dreaming of a bonkers SRT derivative with a gargantuan 6.2-liter V8 and a roof scoop for the Hemi to breathe better. Larger wheels and a lowered ride height would be on the menu as well, along with chunky air intakes and a trunk lid spoiler.

Fully electric pickups are somewhat of a novel idea, although it’s only a matter of time before these will become widespread. The gas-guzzling Ram truck forgoes its big and thirsty American V8 in favor of a zero-emissions powertrain taking advantage of Renault’s EV expertise. Some aero-friendly wheels and a paint scheme inspired by the forgotten Fluence Z.E. denote the truck’s eco-friendly nature, and we have to admit it doesn’t look half bad.

Taking inspiration from the Jeep Grand Cherokee Trackhawk, Renault’s biggest SUV has spawned a high-performance version in the virtual realm. The speedy Koleos was recently facelifted and received new engines, but the four-cylinders are a far cry from the 6.2-liter Hemi V8 of the American SUV with its supercharged 707 ponies. Corroborated with a meaner body kit and some Brembo brakes, the Koleos Trackhawk is so wrong that it’s right.

France’s answer to the Porsche 718 Cayman is an interesting proposal in the sports car segment as the lightweight coupe with its retro styling stands out among its rivals. The expertise of FCA’s Street & Racing Technology (SRT) division could make the nimble two-seater look more aggressive, although swapping out the circular lights to make room for air intakes while installing a hood scoop would be a futile effort given the Alpine A110’s rear-mid-engined layout.

If you’ve been reading Motor1.com for a while, you know the staff here has a soft spot for campers. The adjacent rendering attempts to combine the practicality of the Renault Master big van with the off-road chops of the Jeep Grand Cherokee Overland, resulting in a vehicle ideal for outdoorsy people eager to travel to remote locations and spend the night in the upstairs bed. With solar panels mounted on the roof harvesting energy from the Sun, electricity would not be an issue.

One of the most affordable SUVs money can buy in Europe is the hugely popular Dacia Duster, and we have to admit that this subtle Trailhawk makeover actually makes sense. The Romanian SUV could use an off-road-oriented version with fender flares, chunky tires, and a jacked-up suspension setup. Throw into the mix a couple of tow hooks and we’re sold on the idea of a more adventurous Duster.

The adorable Renault Twingo has a somewhat spicy GT version, but with a puny 0.9-liter three-cylinder engine producing 110 hp, it’s no hot hatch material. The rear-wheel-drive, rear-engined city car has been imagined in SRT apparel with fender flares and a stiffer suspension setup. It probably has a few more cylinders under the engine hood at the back, although there’s certainly not enough space for a big ol’ V8. The Twingo SRT has also been equipped with a giant front splitter that likely doubles as a snowplow during the winter. 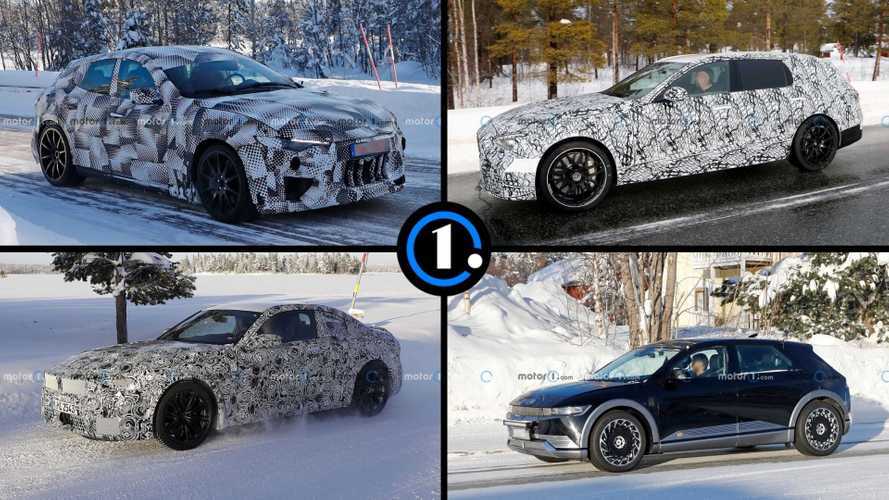 The Megane Hellcat is our favorite, but the Alpine SRT is also rad.

Renault confirmed talks of a potential 50/50 merger with Fiat-Chrysler Automobiles at the end of May, but the discussions didn’t last very long as several days later, “political conditions” in France forced FCA to pull out of what would’ve been a €33 billion ($36.6B) deal. Despite the setback, it might still happen eventually as FCA boss Mike Manley recently told the Financial Times that the company is interested in restarting merger talks.

The on-again, off-again relationship between the two parties has sparked the imagination of our friends at Budget Direct as they decided to do a merger of their own by fusing one car from FCA with one from Renault or its budget brand Dacia. Even if by any chance an agreement will be reached to form a massive automotive conglomerate, the chances of seeing these cars in real life are virtually zero. Nevertheless, it’s still interesting to see how two completely different vehicles come together to form an oddly interesting mashup.

Infusing American muscle into front-wheel-drive European hot hatches or giving stupendous amounts of power to a cheap Romanian SUV is what these following nine car mashups are all about, plus some wild creations like an electric Ram Zero Emissions or a Renault Master Overland Campervan. Hardware limitations and/or low customer demand would prevent most of these mashups from ever seeing the light of day, but nothing can stop us from dreaming of an Alpine A110 SRT or a widebody Renault Talisman.

Click on the right arrow in the image above to browse through the entire set of these purely hypothetical FCA-Renault oddities.

Here Are Other Equally Rad Mashups:

What If Toyota Had Chosen A Different Partner For Supra Than BMW?

These weird car mashups are the stuff of dreams, nightmares

These Insanely Cool Car Mashups Are Driving Us Crazy