Alpine A110 Rally Unveiled For 2WD Competition Beginning In 2020 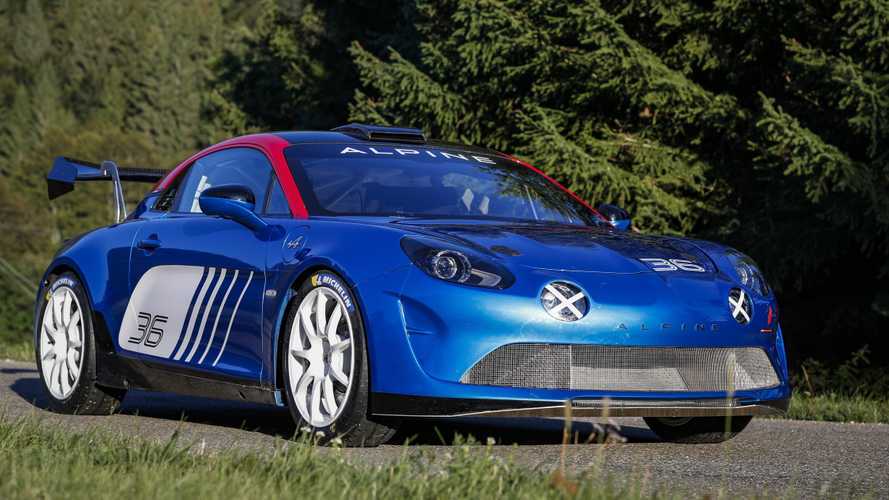 The rally legend returns for privateer teams with €150,000 and a fondness for oversteer.

Frankly, the Alpine A110 isn’t as well-known in America as it should be. We’re talking about both the classic rear-engined car from the 1960s and the modern revival with its engine a bit further forward. The oldie was a sweetheart of a sports car that saw considerable success in stage rally, including the distinction of claiming the first official World Rally Championship title in 1973. Now, Alpine is seeking some of that former glory with its new A110 Rally, specifically built to compete on stages around the world. That is, the world excluding the United States. Bummer.

Alpine isn’t simply offering a graphics package and a roll cage in its hot A110S model. The rally-spec machine is designed and developed by Signatech and uses the lighter chassis from the GT4 and Cup racing models. Since the race track for this car can be anything from dusty tarmac to narrow forest trails, it gets a proper three-way hydraulic rally suspension and upgraded Brembo brakes. Power still comes from the familiar turbocharged 1.8-liter four-cylinder, but in the A110 Rally, it’s tuned to make “more than” 300 horsepower (224 kilowatts).

A six-speed sequential gearbox does the shifting, but if you have visions of seeing this car reclaiming the overall WRC championship, keep dreaming. Awesome as it sounds, this car is still rear-wheel drive and there are no signs of that changing. It does, however, get a new limited-slip differential which will help the A110 get its power to the ground after apexing those hairpin lefts. Being a rally car, it also sports an FIA-homologated roll cage and racing seats with six-point racing harnesses. Development is still ongoing for FIA R-GT homologation, though Alpine says it should be wrapped up in a couple of weeks.

Sadly, we’re not expecting to see a big factory-funded racing effort. Alpine will sell the A110 Rally to privateer teams for 2020, with deliveries expected to begin early in the year. Pricing is listed at €150,000, which translates to approximately $165,560.

The Alpine A110 Rally ready to enter the scene

•             Following the Cup and GT4 versions, Alpine enriches its customer-competition portfolio with the A110 Rally.

•             This two-wheel drive car for privateer teams and drivers will be available for purchase at the end of the year.

Since its announcement in May, the Alpine A110 Rally has piqued the curiosity and interest of competitors, fans and enthusiasts from the motorsport community.

Designed and developed by Signatech from Alpine's general framework, the rally version of the Alpine A110 incorporates the lightweight and agile aluminium chassis of the Alpine A110 GT4 and Cup, derived from the production model.

This version has received additional modifications to meet all the rallying specificities. These include three-way hydraulic suspension, new Brembo brakes and safety elements specific to the sport, such as an FIA homologated roll cage and Sabelt bucket seat and six-point harness system.

Coupled with a sequential six-speed gearbox (plus reverse gear) and a limited slip differential, the 4-cylinder turbocharged 1.8-litre engine from the production model has also been specifically adapted to the rally. In addition to particular work on the torque ban, power has also been increased to more than 300 horsepower.

The two will do the majority of the developmental work to test reliability and set the basic settings. Other drivers will add their contributions to make the Alpine A110 Rally as versatile as possible, easy to drive and affordable so that professionals, gentlemen drivers and young guns can exploit all its potential with efficiency and pleasure.

Meanwhile, Signatech and Alpine are working to get an FIA R-GT homologation, in which the homologation process is still ongoing, in collaboration with the FFSA. This will culminate in the coming weeks and pave the way for the commercialization, then delivery of the first Alpine A110 Rally cars in early 2020, the scheduled date of its competition debut.

Starting today and all weekend long, the Alpine A110 Rally is on public display in Morzine, in the heart of the service park of round six of the FFSA French Rally Championship, Rallye Mont-Blanc Morzine.

This return to rallying is highly anticipated as Alpine made history when it won the first-ever World Rally Championship in 1973. To ensure the success of this new adventure, we have entrusted the research and development, production and commercialization of the Alpine A110 Rally to Signatech, our partner as well in the FIA World Endurance Championship and around the Cup and GT4 programmes. The Alpine A110 Rally looks set to be a very fine car to drive and amazingly efficient.

It is a great honour for Signatech to have been chosen for such an exciting project that will see Alpine return to the special stages. All of our savoir-faire was called upon to meet the Alpine specifications and the first tests were extremely positive. The Alpine A110 Rally demonstrates genuine rally qualities while being a pleasurable car with uncompromising performances. The experience of Manu Guigou and Laurent Pellier was invaluable in this phase of development, and we would like to thank Renault Sport Racing for its expertise and the Team FJ for its help with the testing logistics. We still have a lot of work to do before building the first cars, but this first public appearance marks a new stage in this exciting challenge!

Price ex. vat of model on display without options